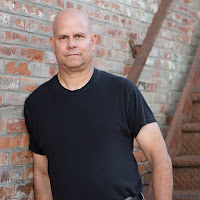 LM: Thanks for joining me today. Congratulations on your recent publication Killer Redemption. What was your inspiration for the story?

B.D.: Since becoming a Christian in 2000, I’ve had a fascination with redemption. I am also a student of the apostle Paul. I thought who is a modern-day equivalent of Paul? Who is someone that would seem beyond redemption? A hitman. From one perspective, Paul was a hitman. He was sent out to kill and capture Christians. How does a hitman get to redemption? He falls in love with a Christian woman.

LM: Your first book, An Angel and a One-Armed Man is crime fiction. What made you try your hand at a romantic suspense book?

B.D.: First of all, let me clarify. Killer Redemption is what I consider romantic suspense, not necessarily what the market considers. That is, a suspense novel with a romantic element. The romantic suspense I’ve read should be called suspenseful romance, as they tend to be romances with some suspense. Killer Redemption is a crime novel, but the romance between Cora and Hardgrave plays a huge part. It was the juxtaposition of that life of crime Hardgrave has and the Christian life Cora has that was the inspiration.

LM: What sort of research did you have to do for your story, and was there a particular tidbit you knew had to be included?

B.D.: This book didn’t require the same rigor of research that many do. One reason is that I made upthe city the story takes place in. I borrowed that from one of my favorite crime writers, Ed McBain, who has a fictional city that’s similar to New York City in his 83rd precinct novels, but it’s not. Same with my city. It’s similar to Boston, but it’s not. I did have to do research on jazz artists, guns, police / FBI procedure.

LM: You’ve written more than two dozen short stories. How was the process of writing a full-length novel different? The same? Do you find one easier than the other?

B.D.: This is always a fun question to discuss. Many newbie writers ask “how long should this story be?” My answer is that a story is as long as a story needs to be and no longer and no shorter. Therefore, for me, ideas come to me and I plot them out in my head. This tends to dictate what the story is, short story, novella, novel. The big difference in the process for me is for short stories, I write them. From beginning to end. Generally, I don’t need to make notes. I don’t scene them out. I just write them. For a novel, I tend to know the beginning, the ending, and the main characters. Much of the rest evolves. Even ancillary characters pop up as I go. For a short story, I know the characters to start with. For novels, I write 5 – 10 scene outlines ahead. I try not to confine myself too much so that’s why only that many scenes forward.

B.D.: Write full-time. I still have a full-time job, so writing doesn’t get the attention I’d like.

B.D.: One exercise I learned from a writing workshop instructor that is valuable for new writers is write your story. Now, rewrite it but cut it in half. Then do that again. Finally, do that one more time. Now, you have the essence of your story. This teaches a writer to recognize what is necessary. Another piece of advice is when you get feedback from neutral readers (not your mom, in other words), if one person suggests something, consider it. If more than one, consider it strongly.

B.D.: I’m working on book two of my One-Armed Detective series. It’s currently called The Coyote and a One-Armed Man. Lefty Bruder and Eileen go to Phoenix to rescue a girl sold into trafficking and end up also trying to save a twelve-year-old Mexican girl sold to a cartel boss.

Lyle Hardgrave is a gentleman, a poet, a jazz lover, and a hitman.

And he’s fallen in love with Cora Wilson, who is energetic, unrestrained, passionate, and devout.

Hardgrave is known to the criminal underworld as the Gorgon. See his face. Die. He’s lived a life of anonymity, a life in which he has total control and where emotions are a handicap. Years ago, he chained them and buried them, then threw away the key.

A series of events threatens his anonymity and his control. He’s forced to kill the son of the top mob boss. His best friend, and the only one that knows his identity, disappears. The FBI closes in. The mob hunts him. All part of the lifestyle he’s chosen.

Except, there’s Cora Wilson. She fills a void he’s ignored for decades. Cora possesses the key to his shackled emotions. One by one she unlocks them. But Cora doesn’t know Hardgrave’s secret. Hardgrave must choose. Leave his criminal life or leave Cora. Even if he chooses Cora, will she accept who he really is? Can he have love from this amazing woman and find redemption from his past? Lyle Hardgrave battles organized crime, the FBI, and unchained emotions to keep himself and the love of his life alive.
Purchase Link: https://amzn.to/3Dk4ziW