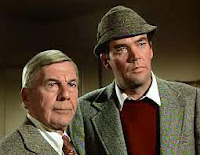 The television program Ellery Queen only ran for two years (1975-1976), but I remember being an avid viewer. Actor Jim Hutton played the title role, and each episode featured some big-name star from Hollywood. (Hutton’s son, actor Timothy Hutton, would later dress as Ellery Queen at a costume party in an episode of Leverage, no doubt in homage to his father.) But Ellery Queen started long before the TV show ever aired.

Created as a pseudonym by two writers with their own pseudonyms, Ellery Queen came into existence in 1928. Frederick Dannay (real name Daniel Nathan) and Manfred Bennington Lee (real name Emanuel Benjamin Lepofsky) were cousins who were born and raised in New York City. They created the character who acts as his own narrator to enter a contest in McClure’s magazine for the best first mystery novel. The good news is they won the contest; the bad news is the periodical went out of business before the piece could be published. After submitting the manuscript to several publishers, the book was finally accepted and printed in 1929, under the title The Roman Hat Mystery.

A great success, The Roman Hat Mystery provided a template the authors would use for most of their 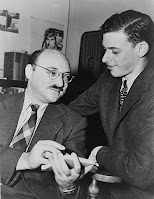 stories: an unusual crime, a complex series of clues and red herrings, lots of misdirected solutions, and a huge cast of characters. Interestingly, the authors also include a single page near the back of the book that declared the reader had seen all the clues Ellery had, and that only one solution was possible.

In 1942, Calamity Town, the first of the “Wrightsville” books is published. Ellery has moved to the small town of Wrightsville, somewhere in New England, so he can find peace and quiet to write a book. He rents a house, known as Calamity House, and becomes involved in the story of Jim Haight and Nora Wright. Three years prior on the eve of his wedding Jim disappeared but has recently returned and the wedding is on again. Then evidence comes to light that Jim is planning to poison Nora, but his sister Rosemary dies instead. Jim is tried for the murder, but Ellery eventually reveals the identity of the murderer. At one point, Ellery himself is a suspect. 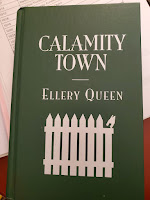 This, as well as the other Wrightsville novels, is considered more character-driven and realistic than the earlier “puzzle” mysteries. There is also quite a bit of observation and comment about the nature of small American towns: “Wrightsville was a place in the US where people lived, worked, and died in an atmosphere of decency and independence. A typical American town…one could freely breathe the air here, although the industry has had its influence.”

Another great book from the Golden Age of Detective Fiction!

Aubry DeLuca storms the beaches at Normandy, then wakes up in the hospital, his eyes bandaged. Will he regain his sight? Will the only woman he’s ever loved welcome him home or is he destined to go through life blind and alone?
Purchase Link:  https://amzn.to/3SuXWPI