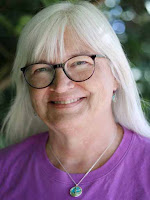 LM: Welcome! Congratulations on your recent release Home Where She Belongs. What was your inspiration for the story?

Penny: Thank you. All of my stories are inspired by the hope I have in Jesus. In Home Where She Belongs, I wanted readers to see the hope Sadie found. She has just escaped an abusive relationship and moved to the island where she spent the summers of her youth with her grandparents and her friends, Lucy and Joel. Sadie needs to learn to trust again and find out there are good men, like Joel, she can count on.

LM: Home Where She Belongs is the first book in the Abbott Island series. How many books do you have planned? How did you come up with the location? (e.g., is it based on a real place, etc.)

Penny: I plan to write three. I have completed the manuscript for book two, Marigold and Johnny’s story and plan for book three to be Lucy’s story. Abbott Island is based on Kelleys Island, Ohio an island in Lake Erie. My husband and I love to vacation in that area. I’ve used some of the features of Kelleys Island to create the fictional Abbott Island. I chose to fictionalize, but wanted to incorporate the beautiful natural setting on Kelleys and the festivals and activities they have. By fictionalizing, I could use my imagination and add what I needed for the story.

LM: How did you come up with your characters? Do any of them have traits of you?

Penny: Sadie and Joel formed after a visit to Kelleys Island and spoke to me about their story. Mycharacters tell me their story as I write. and some show up unexpectedly. Sadie had been on my heart for a while. She is a culmination of women who have been through difficult times and long for a peaceful life. Joel represents hope, even though he is a flawed man, he is a kind-hearted and caring person. I tend to listen to my characters as they tell me the story, and I'm surprised at times where the story goes, but it's a fun process. Marigold came from a woman I met on the island who rented kayaks to tourists. She’s probably got a bit of me in her, because she is a creative and determined lady.

Penny: I often write in the morning, with a cup of coffee. I pray over whatever I am writing. If I forget to pray, the words don’t flow as well. I’ve learned that from experience. I like to sit in my recliner and especially love it when the weather is mild, and I can open my windows and listen to the birds.

LM: What is your favorite aspect of writing?

Penny: I enjoy incorporating nature in my writing, and I like discovering the characters and their conflicts. The last stages of editing, when the story is coming together, brings me great satisfaction.

Penny: My grandkids love superheroes and one day we were talking about what superpower we would like to have. I’d love to be able to teleport, then I could go where I wanted without driving or flying.

Penny: Keep at it. If the dream of publication and the call to write rests on you, put in the time, the work, the tears, the laughter, embrace the love of the written word and be faithful. The time-line between my desire to write fiction and actual publication has been twenty-five years. During that time, I wrote devotions and had some published. I also started a blog where I post devotions, book reviews, and encouraging thoughts. I penned ideas and I read, a lot. So many great books have been written by amazing authors who want to help new writers. I joined the American Christian Fiction Writers and got to attend one conference where I connected with seasoned authors. I found smaller conferences to attend and connect. The encouragement spurred me along. I invested money and time for many years because I knew God called me to be faithful to Him and write, and I eventually learned publication was up to Him. I pray you are surrounded by encouragement.

Penny: At Hope for Today’s Heart where I blog and share book reviews and devotions: https://www.pennyfrostmcginnis.com/
About Home Where She Belongs

Small-town romance with a dash of mystery and the promise of hope.

Tired of being a pawn for her father and an emotional punching bag for her ex-boyfriend, Sadie Stewart escapes to Abbott Island where she spent summers with her grandparents. Would the love and faith she learned from them be enough to fuel her new life? She wants to believe God's promises, yet broken trust holds her back.

Joel Grayson left the island long enough to train at the Police Academy. The community trusts him, even though he's failed. When he finds Sadie at her grandparents' cottages, his heart skips a beat. He'd love to get to know her again, but no one needs to share the hurt he harbors.

When Sadie discovers someone is sabotaging her future, she seeks Joel's help. As they are drawn together, will Joel let down his guard and let her in? Will Sadie trust the man who loves her and the Father Who cares?