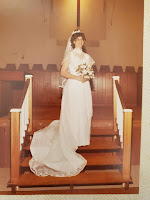 I’ve been married thirty-nine years this month, but I remember the search for my wedding gown as if it was yesterday. One Saturday morning shortly after I got engaged, my mom informed me that we were going to go “window shopping” for a wedding dress. Indicating that she and Dad weren’t sure what sort of costs were involved, they wanted me to do some reconnaissance. I’m not much of a shopper, but this was different. This was a once-in-a-lifetime garment that I’d wear, and I wanted it to be special. I didn’t think we were poor, but with my father as the only breadwinner, four children to raise, and having just finished putting me through college, I figured they didn’t have a whole lot of extra money.

Of we went, in one store after another. The blur of frothy white gowns became overwhelming. I began to worry that I’d never find anything. In one shop, I watched a daughter and her mother argue over the “perfect” dress. Apparently, Mama wanted the world to know they could afford to spend heavily on the gown. Every dress she selected was embellished with sequins and beads. The daughter wanted a simple Grecian gown. We left, and I’m not sure who won.

At our last stop, I donned a dress that brought tears to my eyes, but I hesitated to tell Mom, thinking

we were still only window shopping. She must have seen the look on my face because she said, “That’s the one, isn’t it?” I nodded, and she grinned as she pulled out her checkbook. “Surprise! If you really want it, I will buy it.” I was flabbergasted. The dress cost $210 – a huge amount in my eyes because we’d signed an apartment lease with a monthly rent of $484.

Since the beginning of time, women have wanted a special dress for their wedding, but times of war sometimes thwart the effort. During World War II, fabric was rationed and difficult to find in some cases. As a result, the trend began to make bridal gowns from parachute silk (or nylon). The standards for parachutes were stringent, so if any fault was found, the item became available as surplus and available for purchase.

Some women used the chutes that saved their fiancés’ lives, while others’ loved ones brought home parachutes they’d taken from enemy soldiers, German and Japanese primarily. One site told of a Bergen-Belsen survivor wearing a dress reportedly made from a German soldier’s parachute. Talk about a meaningful dress. Another site told of an American soldier who used his parachute to propose rather than a ring (hopefully, she received a ring later!)

The size of the parachutes enabled women to create dresses with voluminous skirts, puffed sleeves, long trains, and ruffles. Lots of the dresses were passed down through families, and in recent years many of the dresses have made their way into museums. The Wright Museum where I am a volunteer docent is fortunate to have one such dress. The gown is so small, we had to create a form on which to display it; modern dress forms are too large.
__________________