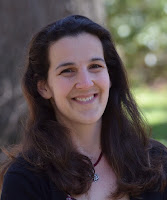 LM: Welcome! Congratulations on your upcoming release The Prodigal Sons, Gott Mit Uns, Book 2. I can't wait to read it. The premise of your book is fascinating – there don’t seem to be many WWII novels written from the German viewpoint. What was your inspiration for the story? How many books can we expect in the series?

Aubrey: Thank you, Linda! In March 2021, I was contemplating how I was going to reconcile my growing appreciation for our family’s German heritage with our upcoming homeschool study of the world wars. While these are not YA books, that’s where the inspiration began. It was almost as if God tapped me on the shoulder and gave me the concept for my first novel, Sani: The German Medic. I hadn’t written creatively in decades. Was I willing to take a step of faith?

In the process of writing that first book, there were characters whose lives ended during the war, yet I just wasn’t ready to let go of them. I had also fallen in love with the Schmidt family. As I prayed more about the whole concept, I knew that I was going to create a family saga. The Prodigal Sons (TPS) goes back to 1923, with a prologue set in 1915, and really sets the stage to allow the reader to better understand the Schmidt boys.

As far as books in the series, I’m hoping for at least 4, but I actually have concepts for Schmidts and close family friends all the way into the future. We’ll see what develops.

LM: What research did you do for the story, and is there a particularly intriguing tidbit you knew had to be included?

Aubrey: To truly understand the experience of the German people, you have to go back centuries.What a fascinating and sometimes tragic history they have. I began with a book called Germany: Memories of a Nation, and I continue to explore the more distant past when I have time, although most of my research for TPS centered specifically on the Weimar Republic and the origins of the Third Reich. I’ve read parts or all of memoirs written by former soldiers of the Wehrmacht, members of the Hitler Youth, and the SS, as well as The Rise and Fall of the Third Reich and various other in-depth histories. I do a lot of internet research, listen to podcasts and, most blessedly, talk to dear people I know who lived through the tragic past or who have researched it in-depth themselves. Also, my husband and I spent three wonderful weeks in Germany this past summer!

LM: In addition to writing, you homeschool and are involved in ministry. How do you balance your responsibilities?

Aubrey: I actually don’t homeschool anymore, though I did for six years. I loved every minute of it, but the Lord knows how much I can balance, and when He made it clear that He was calling me to be an author, he impressed on my heart that it was time for us to place our children in school. He’d whispered to my heart years ago that my oldest would attend school in sixth grade. That’s exactly when all this happened!

That said, there is not a dull moment. I do lead worship at church a few times a month, I’m involved in a German choir, and have also been learning a lot of German and popular songs to join my choir director for some of her other gigs (she’s an incredible singer and accordion player!)… I have to start each day bringing my priorities before God, and place special emphasis on the things I know He’s brought into my life. Sometimes it means saying ‘no’ to other things!

Aubrey: Like many authors, I wrestled with the idea that I had to be formally published before deciding to go with KDP. What it came down to for me was feeling that it was more important to find ways to share the things God had placed in my heart, rather than wait in the hopes of gaining broader publication which may never come. I would rather do a little networking and legwork (which has actually been fun) and trust God to get the book where it needs to go. I’ve been amazed at how far it has gone. There are so many opportunities for authors online, such as your blog!

LM: What do you do to prepare for writing? (e.g., listen to music, set up in a certain place)

Aubrey: Most importantly, I try to spend time reading my Bible and in prayer before I write. That doesn’t always happen! When inspiration hits, I have to get it down, even if it means using the voice recorder on my phone. I carry my Schmidt family in my heart all the time. I used to play music while I was writing, but now that I know them so well, whenever I’m listening to music, even if I’m cooking, cleaning, or in the car, phrases will catch me and I can feel their hearts or their circumstances. I see them in my reading and in every period film I watch. In some ways, I live as much in their world as I do in my own. My 10-year-old thinks I’m weird, but I hope it makes the story better!

Aubrey: Someday, I would love to see some or all of the GMU books translated into German.

Aubrey: Just write, every day. If you’re working on a novel, just write. You can pull stuff out of the manuscript later (and don’t be afraid to – I have a separate folder on my computer entitled “Not Ready to Delete” where I put all the stuff I’ve pulled out!) Also, people need to read your story. Unless God has really made it clear to you that you need to seek formal publishing, indie publishing is an option and is not as hard as you think. Don’t worry about the size of your audience, or compare yourself with anyone else. Yes, there are a lot of books out there, but yours isn’t just white noise. If He’s given you something to say, He will make sure it is heard.

Aubrey: I have a website at http://www.aubreytaylorbooks.com. It’s still very “homegrown,” but you can subscribe separately to both my newsletter and my blog, as well as access the first few chapters of Sani for free. When it releases, I hope to put an excerpt from TPS up there as well.

My social links are:

About The Prodigal Sons:

Ernst was born too late to fight alongside his brothers in the Great War. An alcoholic and brawler, he finds his place in Germany’s postwar struggle by throwing in his lot with the burgeoning Nazi Party. Yet the failed Putsch attempt brings him home to stay for the first time in years.

Jakob is a young prodigy and church musician who wants nothing more than to spend time with his childhood sweetheart and live a quiet life of service to God. Yet this is not the world he was born into.

Friedrich is a German-American who remained in Germany after fighting with the Allies in the Great War. After healing from a life-threatening injury sustained in October 1918, he’s become a devoted husband and man of God who is loved and admired by all. Yet can there truly be forgiveness for the sins of a past that continues to haunt him?

Written as a prelude to Sani: The German Medic, this book stands on its own or can be read in sequence, bringing the reader deeper into the history of the fictional Schmidt family as they wrestle through the tumultuous Twentieth Century in Germany.
Pre-order Link: https://amzn.to/3T4ovLD
Posted by Linda Matchett at 1:30 AM