Fiction Friday: Gone with the Draft

Fiction Friday: Gone with the Draft 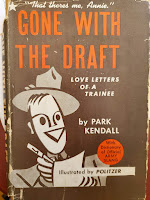 I love to haunt old bookstores because of the unexpected treasures I find. One book I’ve had for several years is Park Kendall’s Gone with the Draft: Love Letters of a Trainee. Published in 1941 by Grosset & Dunlap, the book is a fictionalized account of one man’s experience in an army training camp. Rather than written in a prose format, the book is comprised of letters from Joe to “my dear Annie” and “my moast prescious jewell (sic) and interspersed with illustrations by Irving Politzer, a successful artist who was the son of Hungarian immigrants living in New York City.

Very little biographical information is available for Mr. Politzer, and I couldn’t find any photos of him. I was able to discover that he served in World War I, and his draft card indicates he was an apprentice for Allendorff Studio (which is perhaps where he got his start as an artist). His father passed away in 1919, so Politzer lived with and supported his mother until her death in the mid-1940s. He married a dress shop owner named Tesse Sharpe in 1946, and they remained married until his death in 1971.

I couldn’t unearth any information about the author, and the book’s dust jacket is missing the back, so 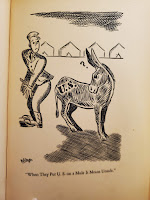 if there was any biographical data on the fly leaf, it’s long gone. At some point, he also published a second book Still in the Draft published by M.S. Mill Co. in 1942. Perhaps, the writer is just a “regular Joe” who eventually came home from the war, married his Annie, finished his education through the GI bill, got a job, and lived happily ever after. I’d like to think so.

The Veteran’s Administration claimed the book is “a worthy successor to Dere Mable.” {Written by Edward Streeter and published in 1919.} The Honolulu Advertiser crows: “The book is all laughs but underneath is a loyalty and love of County.” “Very amusing. The diction of army slang is well worth the price of the book,” touts the Dallas Times Herald.

And speaking of army slang, here are a few phrases from the book: