Despite all my research into World War II England, I somehow missed the “Ack-Ack Girls.” Members of the Auxiliary Territorial Services (ATS), one of the many Auxiliary Services that women ages 20-30 were required to join. Interestingly, British engineer Caroline Haslett was the first to propose that women be used in gun crews. Churchill enthusiastically approved the suggestion, and his youngest daughter, Mary Soames, was one of the first volunteers to serve at a gun site (located in London’s Hyde Park). The nickname came from the distinctive sounds made by the guns.

The crews were mixed-gender squads, with one woman acting as a spotter
(using binoculars to find enemy planes), two women were range-finders (using a large piece of equipment to calculate the distance a shell would have to travel to hit the target), and predictors (working out the length of the fuse necessary to make sure the shell exploded at the right height). Once trained, the entire process only took a few seconds. Because of a royal proclamation forbidding women to fire the weapons, men handled that task – the thought being “life-givers” shouldn’t be expected to be “life takers.” Given the rank of gunner, the women were attached to the Royal Artillery. 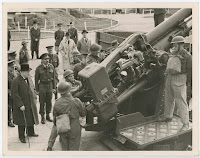 program that included fitness, hearing, eyesight, nerves, and mathematical abilities. By the time the program was up and running in full, the blitz was over, however, the Luftwaffe continued to drop bombs across Britain for the duration of the war, so the crews were stationed around the nation.

One reference I found quoted an officer who said, “The girls cannot be beaten in action and in my opinion, they are definitely better than the men on the instruments they are manning. Beyond a little natural excitement which only shows itself in rather humourous (sic) and quaint remarks, they are quite as steady if not steadier than the men. They are amazingly keen at going into action, and although they are not supposed to learn to use the rifle, they are as keen as anything to do so.” Apparently, it’s safe to assume some of the women operated the gun.

Conditions were dangerous and many crews lost their lives (nearly 400 Ack Ack girls were killed in just three months during the early days of the program.) There is a memorial to the women of the Ack Ack Command in the National Memorial Arboretum in Staffordshire.