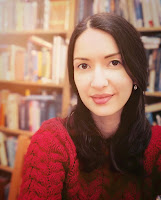 LM: Thanks for joining me today. Congratulations on your recent release The Letter. What was your inspiration for the story?

Edwina: I’ve always loved two-word titles that begin with “The”, and I love old letters, books and paper. As I was trying to form the story in my head, I knew I wanted both of those elements to play a part, but I also wanted to explore a few of the barriers that would make it really difficult to love someone. The first story question that came to mind was: What if the person you fell in love with was pretending to be someone else? Everything developed from there, really.

LM: How do you develop your characters? (e.g. decide on their vocation, names, etc.)?

Edwina: I usually like to choose names that would have been around at the time, and have meanings that connect in some way to the character or the story. Also, for this novel, I ran a contest for my newsletter subscribers to help me choose a name for the character of Miss Withers (there were two winners, who each received a prize!).

LM: A historical novel, the story revolves around the use of chloroform in medicine before it was a regular practice. What sort of research did you do?
Edwina: I read a lot of scientific journal articles from 1847 and 1848, as well as a book on chloroform and how it came into use. I also researched early chloroform cases that went wrong, and the letters and opinions of the doctors who pioneered its use. It was all quite fascinating to learn about.

LM: Your Gems of Grace series takes place during the Regency era, and The Letter is set during theVictorian age. What made you decide to switch time periods, and which do you prefer?
Edwina: The Victorian era has always been my absolute favourite time period. I really enjoyed writing the Regency series, but I knew that for my next series I wanted to explore the Victorian era further and bring it to life in a fictional country town.

LM: What is your process for writing? (do you outline, have a special place or time of day you write, etc.)

Edwina: Once I've got a Bible verse in my heart for a story, I'll start coming up with plot ideas. Then, some research to make sure that the ideas would actually work in the historical era, then more plotting and outlining, alongside the ongoing research of the era in general. Then, I start the first draft. Once that’s done, I'll read through it and do a self-edit, plus check any notes I made along the way about things that I want to double-check in terms of research or continuity. Once that has morphed into the second draft, I send it to my editor for a developmental edit. Upon return, I revise and edit, taking her suggestions and comments into account, and this becomes the third draft. Then, I send it back to my editor for a line edit. After going through her comments, I'll revise the manuscript as I comb through it again, then it's almost ready. A final proof-read, then it's on to formatting and preparing for launch. A lot of work, but I love every bit of it!

Edwina: There are a few dreams in my heart regarding my writing career but, ultimately, I wish to honour Jesus with everything I write, and encourage others to praise and follow Him.

Edwina: Read a lot of well-written fiction. You can learn so much about the craft of writing by examining how successful writers write. Also, keep practicing and writing and honing. Work with a professional editor — you will learn as much (if not more) than you would if you were doing a degree in the subject. And if you know that you have been created to write, never ever listen to the people who will try to stop you. Write. Keep writing. Then write some more.

Edwina: I am in the planning stage for Book 2 in the Victorian Virtues series, The Lamp, which is based upon the theme of “joy” (though the characters will traverse some circumstances that are anything but joyful!). Lord-willing, it will be released in November 2023. Also, my very first historical mystery (part of the Ever After Mysteries series by Celebrate Lit Publishing) is written, and is close to being fully edited. Lord-willing, it will be released in March 2023. It’s set in 1940s Hollywood and is entitled The Vanishing Act.

She wants a new life. He’s in danger of losing his. Will love solve everything — or immerse them in even worse peril?

Restless and ready for a change, Grace Stratton gladly accepts the opportunity to leave her remote parsonage home to serve as a wealthy spinster’s companion in the idyllic country town of Lindenfell. Its warm atmosphere and friendly inhabitants soothe Grace’s lonely heart. But when a mysterious stranger arrives, she soon discovers things aren’t always what they seem.
Convinced chloroform will revolutionise the medical world, Dr. David Carbury frequently administers it to his London patients — until one of them dies. Facing a grave trial to prove his innocence and defend a drug most people view as poisonous, he makes hasty plans to buy time to bolster his case. But he wasn’t expecting to face an even deadlier challenge. As attraction sparks not long after they meet, Grace soon suspects he’s hiding something, and David knows he can’t run from the truth forever. But neither of them could imagine the sinister threat lurking just around the corner…
Purchase Link: https://amzn.to/3Wyr62V
Posted by Linda Matchett at 1:30 AM