Seneca Falls:
Women's Suffrage Meets It's a Wonderful Life
Located approximately an hour’s drive from Buffalo, the town of Seneca Falls, New York is in the northern part of the Finger Lakes Region. Lake Ontario is a forty-five-minute drive north. First populated by the Cayuga tribe, the Native American villages were decimated during the Revolutionary War. Upon the conclusion of the conflict, the region became part of a tract reserved for veterans. By 1818, a canal was completed that allowed transport between Seneca Lake and Cayuga Lake. Ten years later, the canal would be connected to the Erie Canal.

The Bayard Land Company held all the real estate on both sides of the Seneca River, but did minimal development, concerned that multiple mills couldn’t be supported (despite reports that the force of the falls could handle approximately one hundred and fifty millstones.) By 1825, the company was in financial straits, so the tract was divided and sold. The now-accessible water power was snapped up, and mills and factories sprang up. Within six years, five sawmills, five flour mills, two textile factories, and three tin and sheet-iron plants dotted the landscape.

In 1831, Seneca Falls was incorporated as a village with Ansel Bascom elected as the first mayor. Bascom would eventually become a congressman for the district with anti-slavery measures being his focus. With the completion of the Rochester-Auburn railroad system in 1841, the town could now reach world markets for its locally produced goods. The trains also brought an influx of settlers, many of whom were proponents of women’s rights and the abolition of slavery, with the town becoming a stop on the Underground Railroad.

Thus, it is unsurprising that in July of 1848 the town became the site of the first meeting to be held for 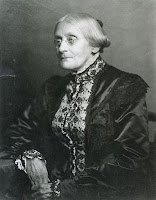 the strict purpose of discussing “social, civil, and religious conditions and the rights of women.” Considered by most scholars to be the birthplace of the fight for women’s rights, the Seneca Falls Women’s Rights Convention was attended by over three hundred people. Speakers included such luminaries in the cause as Susan B. Anthony, Lucretia Mott, Elizabeth Cady Stanton, and Frederick Douglass, and “A Declaration of Sentiments” was adopted. Seneca Falls is now home to the National Women’s Hall of Fame built in 1969.

Open year-round, Seneca Falls It’s a Wonderful Life Museum opened December 10, 2010 with one display case and a wall of quotes from Frank Capra. Since then, a wide range of items have been added such as call sheets, an original program from the film’s premiere at New York’s Globe Theater, and earrings owned and worn by Gloria Graham as Violet Bick. Handprints of Jimmy Stewart, Karolyn Grimes, Carol Coombs, Jimmy Hawkins, and Jeanine Roose are also on display, along with many pieces from the personal collections of some of the actors. Funds are now being raised to expand the museum. (https://www.wonderfullifemuseum.com/)

A visit to this intriguing town is now on my bucket list. Have you heard of this tiny hamlet?

Pledges can’t be broken, can they?

Finally out from under her father’s tyrannical thumb, Maeve Wycliffe can live life on her terms. So what if everyone sees her as a spinster to be pitied. She’ll funnel her energies into what matters most: helping the less fortunate and getting women the right to vote. When she’s forced to team up with the local newspaper editor to further the cause, will her pledge to remain single get cropped?

Widower Gus Deighton sees no reason to tempt fate that he can find happiness a second time around. Well past his prime, who would want him anyway? He’ll continue to run his newspaper and cover Philadelphia’s upcoming centennial celebration. But when the local women’s suffrage group agrees that the wealthy, attractive, and very single Maeve act as their liaison, he finds it difficult to remain objective.
Posted by Linda Matchett at 1:30 AM