Talkshow Thursday: Sweets for the Sweet 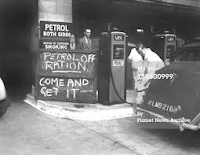 Hello. Ruth Brown here. When anyone is talking about WWII, one of the first topics of conversation is rationing, both food and fuel. But frankly it seemed folks in England adjusted better to the lack of fuel more so than the lack of food. As someone who loves a good meal, I can understand.
When I arrived in London in June 1942, rationing had been in place for nearly three years. During the war bread, potatoes, vegetables, fruit and fish were never rationed (although interestingly enough bread was rationed after the war). Since the war’s end, I have read conflicting reports as to the over all health of the population. Some accounts indicate the British people were underfed and undernourished, and as a result illness was on the rise. Other reports indicate the population was “healthier than before.”

I would imagine the truth is somewhere in the middle. A somewhat active thirty-year old woman requires an intake of 1200-1500 calories per day. A man requires 1900-2100 calories. Because higher caloric foods such as processed sweets (cakes, cookies, scones, etc.), and beef and chicken were eaten with less regularity during the war, it would take a lot more food to make up the missing calories. Was the food available? From what I could discover, the answer to that question depended on where you lived.
Folks on the coast had access to fish. The inland population had access to potatoes and bread. Fruits were difficult to find anywhere; and in fact, bananas disappeared for the entirety of the war. Some children saw their first one at aged 10 or 12.

I often wonder if children raised during the war never developed a “sweet tooth.” As someone who loves dessert, I think that would be a real shame.
Posted by Linda Matchett at 3:00 AM