As long as there have been wars, there have been doctors and hospitals to patch up the wounded. During WWII, one of those hospitals was the Walter Reed Army Medical Clinic located in Bethesda, MD. The facility, opened on May 1, 1909 and named for the man who was the leading researcher to discover that yellow fever was transmitted by mosquitos, was several years in the making and replaced the aging hospital at Washington Barracks.


According to the hospital’s website, “WWI saw the hospital’s capacity grow from eighty patient beds to 2,500 in a matter of months. Through WWII, Korea, and Vietnam, the facility treated hundreds of thousands of injured American soldiers.”


Some of those injured American soldiers were a portion of the approximately 15,000 U.S. Army amputees. To address the need for care of these amputees, Army Surgeon General Major General Norman T. Kirk established seven amputation centers. As one of the seven centers, Walter Reed (as it was known), had the capability to provide up-to-date surgical, medical, prosthetic and rehabilitative care. In addition, the facility offered general medical services to other injured soldiers. How did a soldier arrive at the facility? WWII combat medic Pfc. Keith Winston explains the journey a wounded soldier made: 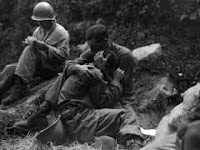 “A message was sent back to the forward Aid Station (a distance of 300-1000 yards from the front) making the notification of a wounded individual. The medics rushed a litter to the location and administered first aid on the spot, after which they carried the litter to a jeep. The jeep took the patient to the next Aid Station (anywhere from one to three miles from the front) where a physician would treat the soldier. From there, the patient was rushed by ambulance to a Clearing Company. If the case is one whereby the casualty is so severe and he won’t get better very soon, he was shipped back even further to a General Hospital and eventually back to the States.”
To this day, Walter Reed continues their service to the thousands of amputees Their Military Advanced Training Center is a state-of-the-art facility dedicated to the care and rehabilitation of American servicemen and women.
Posted by Linda Matchett at 4:30 AM