Mystery Monday: The Disappearance of the L-8's Crew

Mystery Monday: The Disappearance of the L-8's Crew 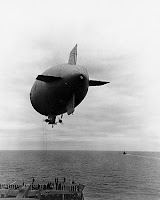 When the U.S. entered WWII, the Navy took over the operation of Goodyear’s five commercial blimps to use them in patrolling for submarines and delivering goods. They were also equipped with two 350 pound bombs.

Blimps (or air ships) are nothing more than inflated bags. The East coast base for these unusual flight craft was located in Lakehurst, NJ (the site of the Hindenburg crash), and the West coast base was located on Treasure Island in San Francisco Bay. With one exception, the blimps were used successfully throughout the war; most notably in conjunction with Doolittle’s Raiders.

At 6:03 AM on August 16, 1942, the L-8 lifted off from Treasure Island with a two man crew.
Normally, flights use three men, but at the last minute the mechanic was ordered to stand down because the craft was too heavy having been coated in moisture from the day’s cool fog. By all accounts, pilot Lt. Ernest DeWitt Cody, and co-pilot Ensign Charles E. Adams were both highly skilled flying airships, so the flight should have gone off without a hitch.

Unfortunately that is not the case.

When the blimp crashed onto the golf court on Belleview Avenue in Daly City shortly before noon, both men were missing, and the door to the gondola was latched open. The Navy conducted an extensive search followed by an inquest that raised more questions than answers.


The Navy’s final determination was that the men had simply fallen out of the gondola. They were listed as missing, and a year later declared dead.

My heart goes out to the men’s wives who never learned what really happened to their husbands.