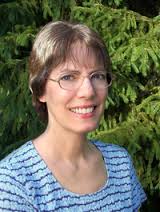 I am thrilled to welcome back Terri Wangard who has recently released the third and final book in her Promises for Tomorrow series. It's an exciting conclusion, and you'll want to pick it up. Meanwhile, grab your favorite beverage and read on to learn more about Terri and her book.

Linda:  The third book in your Promise For Tomorrow Series has recently been released. Did you set out to write a series or did it just sort of happen?

Terri: At an ACFW conference, an editor told me I would be likelier to get a contract if my Friends & Enemies was part of a series. I’d already started a contemporary story. That got shelved and I jumped back into World War II.

LM: Where did you find your inspiration for this story?

Terri: I wanted something different. Friends & Enemies featured a German widow and No Neutral Ground had an American woman working with the OSS in Sweden. At first I thought about the train canteens, but that would be difficult since the main characters would meet once and then be separated for the rest of the war. Plus, Cara Putman did a canteen story. While I was researching the canteens, I discovered the Red Cross clubmobiles. That’s it!

LM: You obviously have a love for the WWII era. What draws you to that time period?

Terri: Friends & Enemies was inspired by a batch of letters written by distant cousins in Germany to my grandparents in the postwar years. My grandparents sent them care packages while Germany was destroyed and the population desperate. Once West Germany turned an economic corner, the cousins no longer needed help and contact was lost. Using those letters, I crafted a story about their lives during the war.

LM: Lots of research goes into each story to ensure historical accuracy. What is your method for researching a story, and how much time goes into that before you begin to write?

Terri: I read memoirs. Lots of memoirs. People telling of their experiences offer lots of ideas for my characters. Often, I buy used books so I can refer to them throughout my writing. I have notes all over the place, and usually can’t find them when I need them. I tend to obsess about getting everything exactly right, which slows me down. My first book took about a year to write. Later, I had to go back and rewrite much of it to a narrower time span. I’ve also gotten ideas from WWII TV shows, like Hogan’s Heroes (No Neutral Ground) and 12 O’Clock High (In Soar Like Eagles, the ditched crew uses a Gibson Girl radio with balloon to hoist the antenna).

LM: Have you ever experienced writer’s block, and if so, what did you do to push through it?

Terri: I’ve never had anything long-term. If I can’t figure out how to move a scene forward, I’ll leave it. Go for a bike ride or use the treadmill and let ideas percolate.

Terri: I have a stand-alone WWII book, Wheresoever They May Be, coming out late this year with Celebrate Lit. That will be my last WWII book. My current series project takes place thirty years earlier, and I have an idea for something thirty to forty years before that, inspired by my family tree again.

Linda: Thanks for stopping by, Terri. As always it's a pleasure to chat with you.

Readers be sure to stop by CelebrateLit Publishing to pick up Terri's latest: Soar Like Eagles.
Posted by Linda Matchett at 1:00 AM