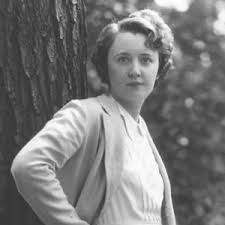 Author Mignon Eberhart is a distant memory for many and unheard of by many more. However, at one time she was the third highest paid mystery writer behind Agatha Christie and Mary Roberts Rinehart. Not bad for a girl who didn't finish her degree.

Spanning over sixty years, Mignon's career is one of the longest among the major mystery writers. Her first book, The Patient in Room 18, was published in 1929, and her last book Three Days for Emerald was published in 1988 when she was 89 years old! She wrote one series with Nurse/amateur sleuth Sarah Keate, but the majority of Mignon's books were stand alone novels. A prolific writer, she published novellas, short stories, and plays as well as over sixty novels, nine of which were made into movies.

Romantic suspense is a well-known sub-genre in literary circles, and there are many modern-day writers of note. But when when Mignon was publishing, romantic suspense had not yet come into its own, and she had a strong hand in developing it.

Critics of Mignon's writings have noted that her heroines are usually somewhat silly and her plot devices somewhat repetitive (her protagonists get knocked out quite often), but most agree that her settings are inventively eerie, and her prose vivid and evocative:

"The room was bare and hot and bright with electricity. Mina, in that incongruous ivory satin, sat down at her tall desk and drew a fat checkbook forward."  (The Dark Garden, 1933)

Solving the mystery is only a portion of Mignon's books. The other is finding true love against all odds. For Mignon, apparently it was not only about the good guys winning, but for love to find a way. With any luck your local library will have some of this author's gems in their fiction section.