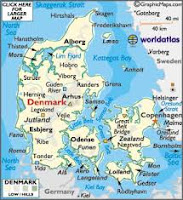 On the Rails is my latest publication. Perhaps you had a chance to meet the main female character, Katherine Newman in my post on February 16, 2017. Now I'd like to introduce you to Henry Jorgensen, Katherine's boyfriend and the reason she began a new life as a Harvey Girl.

Linda: Thanks for stopping by Henry. Your family is Danish, having immigrated to the U.S. in the late 1800s. Can you tell us about that?

Henry:  My paternal grandparents arrived in New York in 1869, shortly after the American Civil War. My father was a young man at the time. His family decided to leave Denmark because of the joblessness caused by the rapid population growth and the loss of a portion of the country to Germany. Five years prior to their leaving, Slesvig-Holsten fell to the Germans. Danish culture was repressed and there was political persecution. Rather than move elsewhere within Denmark, my grandparents decided to seek a new life in America. My maternal grandparents arrived several years later.

Linda: The Scandinavian population is not as large in Ohio as elsewhere in the U.S. Why did your family choose to settle in Warren?

Henry: In the early 1800s most of the Danish people settled in Eastern cities, but like most Danes my father's family were farmers and had been for generations. It is what they knew how to do and could make a living at it. The Homestead Act of 1862 said that any immigrant who filed an intent to become a citizen could claim 160 acres of unoccupied government land and earn the title in five years. Or that person could work as a farm hand and earn enough to purchase a farm in ten years. My father's family was heading west and passed through the Warren area. They liked what they saw and felt they had traveled far enough, so they staked their claim.

Linda: You broke up with Katherine because of financial reasons. Your parent's mortgage was being called in, and you didn't feel that you could provide for her. What happened?

Henry: My younger sister became quite ill when she was a child, and my parents took her to specialists in Cleveland. The treatments were very expensive, so they took out a mortgage on the farm to pay the bills. Then we had a crop failure that greatly reduced our income, and we got behind on our payments. I didn't feel it was right to subject Katherine to the stress of my family's financial woes.

Linda: You took a job on the railroad to help your parents make mortgage payments. What was that like?

Henry: It was a big adjustment for me, but it was important that I do my part to help my family. After living in a rural, farm community working on the trains was difficult. They were loud and dirty, especially shoveling coal to keep the engine going. I transferred off the trains to laying track, and that was only slightly better. It was hard work being outside in all kinds of weather conditions as well as geographically. We were laying track across rivers and through mountains, canyons, and deserts. I'm used to working outside, so I don't think it was as difficult for me as it was for some. The money was excellent, so I was able to send quite a bit home.

Linda: Thanks for visiting with us Henry. Readers can hear more about your story in On The Rails, available for free in eBook format from March 1-5.

Warren, Ohio, 1910: Katherine Newman loves being a teacher, but she loves Henry Jorgensen more, which is why she’s willing to give up her job to marry him. But instead of proposing, Henry breaks up with her. Devastated, Katherine seeks to escape the probing eyes and wagging tongues of her small town. A former Harvey Girl, Katherine’s mother arranges for Katherine to be hired at the Williams, Arizona Harvey House. Can she carve out a new life in the stark desert land unlike anything she’s ever known?

Henry Jorgensen loves Katherine with all his heart, but as the eldest son of a poor farmer can he provide for her as she deserves? The family’s lien holder calls in the mortgage, and Henry must set aside his own desires in order to help his parents meet their financial obligation. But when Katherine leaves town after their break up, he realizes he’s made the biggest mistake of his life. Can he find her and convince her to give their love a second chance?
Posted by Linda Matchett at 1:00 AM