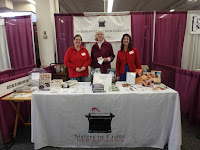 On Saturday, I worked the Sisters in Crime booth at the Women’s Expo in Manchester, NH. I was surprised at the number of visitors who were unfamiliar with SinC, although I guess I shouldn’t have been. There are myriad industry groups from transportation to retail and certainly lots of writing organizations.

An international organization, SinC currently has forty-eight chapters world-wide. The goal? “To promote the ongoing advancement, recognition, and professional development of women crime writers.” (Just so you know, we do allow male members and have lots of “brothers.”) A thirtieth anniversary event is being held in Boston on March 25th.

A full history can be found on the Sisters in Crime website but here’s a brief synopsis:

In the mid-1980s 82-year-old author Phyllis Whitney wrote a letter to the Mystery Writers of America noting that it had been fifteen years since a woman had won an award for Best Novel. She then asked if they felt free from discrimination. That incident started a lot of “buzz” from the younger female writers. In response, Sara Paretsky (author of the V.I. Warshowski series) talked to a number of women at the 1986 Bouchercon conference, they agreed to meet the following year. (Interestingly enough they met during Edgars week)

Their initial mission was “Sisters In Crime is committed to helping women who write, review buy, or sell crime fiction. Our ultimate goal is to become a service organization to address issues of concern to everyone involved in the mystery field.” As a member of the main organization and the New England chapter, I can tell you they have met their goal resoundingly. Personally, I would not be a published author were it not for SinC.

Do you love to read mysteries? Visit SinC’s website for a list of member authors. Find everything from romantic suspense and thriller to cozies and traditional mysteries.