Mystery Monday: The Many Names of Dolores Hitchens

Mystery Monday: The Many Names of Dolores Hitchens 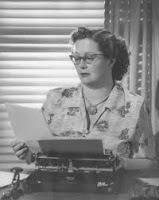 I guess it's pride, but as an author, I find it gratifying to see my name on a book cover. It's fascinating to me when writers choose to publish their work under a pseudonym. There are as many reasons as there are nom de plumes, and most readers have no idea why an author makes that choice. Mystery writer Dolores Hitchens wrote under four different names, perhaps more.

Her most successful series featuring spinster Rachel Murdock and her cat Samantha included twelve books released between 1939 and 1956. Considered cozies today, the books are well-written and include lots of twists and turns that keep the reader guessing. Rather than be a cliched little old lady, Rachel is sharp-witted and willing to take risks despite being 70+ years old.

A series she co-authored five "railroad mysteries" with her husband Bert who was a railroad detective, individuals responsible for the protection of railroad property, facilities, and personnel, and sometimes patrolling the public rail transit system.

Most of the more than two dozen other mysteries she penned tend to be traditional detective stories. Sleep with Slander has been called "the best traditional male private eye novel written by a woman." (A bit of a left handed compliment if you ask me!). Fool's Gold was made into a movie called Bande a Part by French director Jean-Luc Godard. It was released in North America as Band of Outsiders and met with good success.

Born in Texas on Christmas Day in 1907, Dolores worked as a nurse and then a teacher before starting her writing career. An intensely private person, not much is known about her. She passed away in 1973.