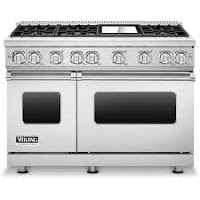 Research turns up the most interesting information, and my favorite tidbits are those that include real-life incidents and insights. Saturday, I volunteered at the Wright Museum of WWII as I usually do, and when I got home my husband Wes was busy preparing treats for church on his six burner Viking gas stove. We upgraded the kitchen when we purchased the Bed and Breakfast we operated for twelve years, so it's not your everyday appliance.

A trained chef, Wes works magic in the kitchen (or on a campfire!). Watching him work got me thinking about what it was like to cook
in a WWII kitchen. 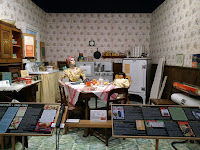 Look closely at the photo of the Wright Museum exhibit. What strikes you most about what's in the picture? For me, it's the size of everything. Granted our stove is larger than a standard household fixture, but even today's family stoves are much larger than the one in the exhibit. Can you imagine trying to bake a turkey or pot roast in that teeny-weeny oven?  Check out the size of the fridge. Again, our refrigerator is a good size because of running the business, but nowadays even apartment fridges would be larger than the one shown here. And with the compressor on top, storage space is lost.

Something else I noticed after studying the exhibit is the amount of metal used. In an "aha" moment (even after all the reading and researching I've done about the era), I realize why it was necessary to perform scrap drives. It seems that what wasn't made of wood was constructed of metal (steel, aluminum, and iron). From the skillet on the wall and pots on the stove to the containers of spices on the shelves and food items such as crackers and tea to the right of the stove, nearly everything was made of metal. 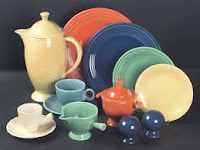 Other items of interest are the lack of a built-in pantry - those are a modern invention taking the place of pie-safes and shelving units such as the one shown on the left. Are you familiar with Fiestaware? I was fortunate to inherit several pieces when my grandfather passed away. Introduced in 1936, with a hiatus from 1973 to 1985, Fiestaware is glazed ceramic dinnerware that featured thirty-seven different pieces, with as many as sixty-seven pieces during its heyday. During WWII, the line was reduced and by the end of the war, with the more unusual serving items being discontinued. Initially produced in five colors: red, blue, green, yellow, and ivory. Turquoise was added in 1938.

What is not included in the photo because the items would have been stored elsewhere, are the jars of canned goods a housewife would have put by from her Victory Garden. Notice something else that's missing? There's no automatic dishwasher. Everything would have been washed by hand.

I imagine that days were long for a 1940s housewife. Most of the chores were done by hand: laundry - that included a wringer washer, hanging clothes to dry, then ironing them (note the ironing board and mangle to the right), dusting, sweeping (not everyone could afford a vacuum cleaner), mopping, and dishes (washing and drying). I'll try to remember that the next time I complain about having to empty my automatic dishwasher! How about you?