As if war were not enough for the residents of San Sebastiano, Italy, they were subjected to an eruption of Mount Vesuvius. Over the span of nearly two weeks, the volcano (active for centuries) spewed rocks, ash, lava, and debris.

Reports indicate the rocks were the size of basketballs, and layers of ash measured more than a meter deep. Lava and debris crushed and burned everything in its path while the earth rumbled, shimmied, and shook as evacuees tried to maintain their footing. According to a New York Times reporter, “The sound was exactly like artillery fire.” I imagine he was in a position to know that! 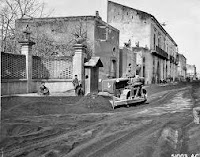 Because of the Allied invasion of Italy, continued combat, and chaos in the Italian government, the U.S. military took command of public safety and evacuation. In a major understatement, and April 1944 article in Life Magazine commented that the incident “has compounded the complexities of fighting a war and of merely existing in southern Italy. The eruption has given the Allied Military Government several thousand more refugees to look after and brightened the night horizon as far north as Anzio beachhead.”

On the other side of the volcano, the U.S. Army Air Force’s 340th Bombardment Group initially thought they wouldn’t need to evacuate. However, as the lava began to flow on their side of the mountain, plans changed, and the men moved to a nearby airfield where they spend the night in a tobacco shed. The $25 million worth of planes, equipment, and supplies left behind were lost.

Sgt. Robert F. McRae recorded the experience in his diary. “As I sit in my tent…I can hear at four- to ten-second intervals the loud rumbling of the volcano on the third day of its present eruption. The noise is like that of bowling balls slapping into the pins on a giant bowling alley. To look above the mountain tonight, one would think that the world was on fire. The thickly clouded sky glows like that above a huge forest fire. Glowing brighter as new spouts of flame and lava are spewn from the crater. As the clouds pass from across the top of the mountain, the flame and lava can be seen shooting high into the sky to spill over the sides and run in red streams down the slopes.” 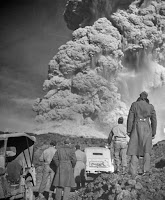 Frightening? Absolutely, but according to the Professor Guiseppe Imbo, Director of the Mt Vesuvius Observatory at the time of the 1944 eruption, “A marvelous thing, my Vesuvius. It covers land with precious ash that makes the earth fertile and grapes grow, and wine. That’s why, after every eruption, people rebuild their homes on the slopes of the volcano. That is why they call the slopes of Vesuvius the “compania felix”—the happy land.”

There were no military casualties during the eruption, but twenty-six Italian civilians were killed and nearly 12,000 displaced. However, the village of San Sebastiano was rebuilt.