One of the last states to enter the union (46th), Oklahoma was created by merging the Oklahoma and Indian territories, and is a major producer of natural gas, oil, and agricultural products. The state’s name is derived from the Choctaw words “okla” and “humma” meaning “red people.” It is nicknamed the “Sooner State” because of the non-Native settlers who jumped the gun in staking their claims before the official opening date of land grants.

As with most of the United States, Oklahoma suffered during the Great Depression despite receiving federal assistance through President Roosevelt’s New Deal. With the advent of WWII, life changed for the state. The number of clear days made Oklahoma a prime location for flying. Even before the US entered the conflict, programs for training British Royal Air Force pilots were created. Between them, the Darr Flight School and the Spartan School of Aeronautics taught over 13,000 students how to fly. 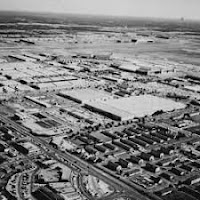 Thirty-two POW camps around the state housed approximately 20,000 German prisoners. Many earned wages on local farms, replacing the thousands of men who left the fields for the armed services.

Nearly 5,500 Oklahomans died during the war, and nineteen received Congressional Medals of Honor. A National Guard Unit drawn from Oklahoma, Colorado, New Mexico, and Arizona was called to service under Major General William Key as part of the 45th Infantry Division. As participants in the invasion of Sicily, they fought for 511 days, captured more than 120,000 prisoners, and suffered 3,650 casualties. They fought in eight campaigns and made three additional amphibious landings.

Oklahoma truly did its bit.