Release Day: A Doctor in the House

Release Day: A Doctor in the House

I'm excited to announce the release of A Doctor in the House. Originally published as part of The Hope of Christmas collection, this story is about one of the milestones American women achieved during World War II: the opportunity for women doctors to hold equivalent rank as their male counterparts in the Army and Navy medical corps. A short time after the Sparkman Act of 1943 was signed, Dr. Margaret Cahill became the first female doctor in the Army Medical Corps. After hearing about this remarkable woman I knew I wanted to spotlight her and others who served in this manner. Hence, the idea for A Doctor in the House was born. 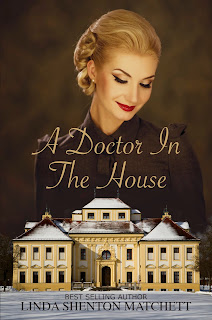 They’re supposed to be allies, but mutual distrust puts this pair on opposite sides.

Emma O’Sullivan is one of the first female doctors to enlist after President Franklin Roosevelt signs the order allowing women in the Army and Navy medical corps. Within weeks, Emma is assigned to England to set up a convalescent hospital, and she leaves behind everything that is familiar. When the handsome widower of the requisitioned property claims she’s incompetent and tries to get her transferred, she must prove to her superiors she’s more than capable. But she’s soon drawn to the good-looking, grieving owner. Will she have to choose between her job and her heart?

Archibald “Archie” Heron is the last survivor of the Heron dynasty, his two older brothers having been lost at Dunkirk and Trondheim and his parents in the Blitz. After his wife is killed in a bombing raid while visiting Brighton, he begins to feel like a modern-day Job. To add insult to injury, the British government requisitions his country estate, Heron Hall, for the U.S. Army to use as a hospital. The last straw is when the hospital administrator turns out to be a fiery, ginger-haired American woman. She’s got to go. Or does she?