Traveling Tuesday: Iowa in the 1800s

Traveling Tuesday: Iowa in the 1800s

One of twelve midwestern states, Iowa is the only state whose east and west borders are formed almost entirely by rivers (the Mississippi to the east, and the Missouri and Big Sioux to the west). Populated by Native Americans for thousands of years, the area didn’t see European explorers until the late 1600s. Jacques Marquette and Louis Jolliet from France traveled from France to document indigenous villages. The French claimed the territory and it remained in their hands until 1763 when they transferred it to Spain just before losing the French and Indian War.
By all reports, Spain practiced loose management of the region known as Louisiana, granting trading licenses to French and British traders who established posts along the Mississippi and Des Moines rivers. Highly successful, the traders obtained lead and furs from the indigenous people. By 1800, Napoleon was given control of the territory in a treaty with Spain. Two years later President Thomas Jefferson obtained information that Spain planned to cede the land back to France, and he brokered a with the French to purchase approximately 827,000 square miles for fifteen million dollars. Over the course of several years, the territory was subdivided, and much of Iowa was mapped by Zebulon Pike.
Settlers didn’t move into the Iowa until 1833. Mostly from Ohio, Pennsylvania, New York, Indiana, 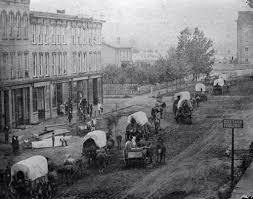 Kentucky, and Virginia, families built homes on the banks of the Mississippi River, founding Dubuque and Bellevue. On July 4, 1838, Congress established the Territory of Iowa, and President Van Buren appointed Robert Lucas governor.
Almost immediately, the inhabitants began to push for statehood, but their dream would not become a reality until eight years later. In an effort to attract more citizens, the state organized campaigns to reach settlers and investors, touting the states rich farmlands and “free and open society.”
Des Moines, the town where my upcoming release A Bride for Seamus takes place, was incorporated in 1851 as Fort Des Moines, no doubt named for the Des Moines river on which it sits. Six years later the capital would move from Iowa City to Des Moines in order for the government to be more centrally located within the state. Very little growth occurred during the Civil War, but within a year after the cessation of hostilities, the railroad link was completed and the population exploded.
In addition to agriculture, coal mining became a huge industry in the area and by the mid 1870s, the city was shipping twenty carloads of coal every day. Fifteen years later there were twenty-three mines in operation. Railroad tracks crossed the state, and even small towns had six passenger trains a day. In addition, railroads provided year-round transportation for Iowa’s famers, so that the corn, wheat, beef, and pork could be shipped through Chicago to markets all over the U.S. and worldwide. Additional industries included oat processing plants (Quaker Oats) and meat packing plants. 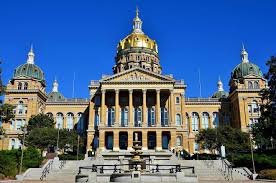 The 1870s also brought hundreds of thousands of foreign-born immigrants to Iowa. Competition among the states for immigrants had increased, and the states took a variety of measures to attract them. Having created its own Board of Immigration in 1870, Iowa printed promotional materials in English, German, Dutch, Swedish, and Danish. One of the brochures was Iowa: The Home of Immigrants, and included physical, social, education, and political descriptions. The campaigns were successful and by 1890, the state had attracted nearly one million foreign nationals.
Have you ever visited this beautiful and interesting state?
____________________
About A Bride for Seamus

Can two people set aside presumptions, prejudices, and pain to find love?
When her father dies after a lengthy illness, Madeline Winthrop is horrified to discover his will bequeaths their home to his business partner, a cruel and dishonest man, leaving her destitute. With no job or marriage prospects, she seeks help from her pastor who suggests she considers becoming a mail order bride. There’s just one catch. She’s to marry the man by proxy before ever meeting him.
After three mail order brides refuse to stay and marry Seamus Fitzpatrick because of his brother’s mental health issues and two rambunctious children, Seamus decides a proxy marriage is the only way he’s going to secure a wife. When the Boston-bred socialite arrives with few practical skills, he wonders if he made the biggest mistake of his life. Iowa's earliest white settlers soon discovered an environment different from that which they had known back East.
Purchase Link: https://amzn.to/37MpTOa
Posted by Linda Matchett at 1:30 AM