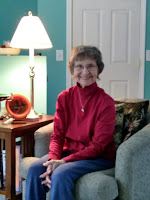 Today is Valentine's Day, and for most people that means candy and flowers. However, the day has never been about romance for me because it's my mother's birthday. I'm blessed that she lives close by and is in good health, something I don't take for granted. She is an intriguing mix of her parents: shy and an avid reader like her mother, and tenacious and independent like her dad.

Born in the middle of the Great Depression, she was raised on a farm in a small town in Maryland surrounded by lots of extended family where she was more comfortable with outside chores than being in the kitchen. As a result, she has an encyclopedic knowledge of plants and trees and could easily have had a career as a landscape architect. You should see her front yard!

By the time she started school, the country was at war, and several of her uncles and cousins went overseas to serve, some of whom didn't return. Despite being fairly young during WWII, she has strong memories of collecting scrap metal and looking at the maps on the front of the newspapers. She can recall her mother saving fat and mending the family's clothes rather than making new ones. Because of living on the farm, rationing didn't affect Mom or the family as much as it did my dad who lived in Baltimore City, although she does talk about gas rationing, and the fact the family rarely went anywhere. She was eleven years old when the war ended.

Her folks scrimped and saved to purchase a piano and arrange lessons for her. She took to the instrument like the proverbial duck to water and by early high school was playing for the church choir. Further saving allowed her to attend Western Maryland College where she obtained her bachelor's degree in music and met my father. They married, and she followed him to various locations first with the Army, then Citgo, and finally IBM. At each location, she got involved in their church's music program, often serving as church pianist. Her love of books prompted her to start libraries in several of her churches.

She has friends all over the country and faithfully corresponds with them using the postal system. That's right - no email for her. She'd much rather handwrite a letter - a lost art. And folks don't have to be far away for her to bless them with a card or letter - I've received quite a few myself.

Happy birthday, Mom! I don't tell you often enough how much I love you!