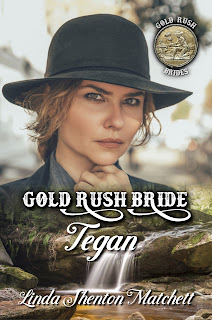 Thanks to everyone who pre-ordered Gold Rush Bride Tegan. I had fun writing her story. She is the granddaughter of Hannah and daughter of Caroline (Books 1 and 2 in the series). Exploring this trio of women has been fascinating. In many ways similar - tenacious, bold, and adventuresome, they are also quite different, dealing with insecurities and issues of their own.
I read lots of diaries and memoirs of women who were part of the various gold rushes, and for this book, the Alaskan gold rush in particular. We often romanticize history, and there may have been some glamour in leaving everything behind to travel to a distant location and seek one's fortune. But the reality was more often than not harsh with injury, disease, danger, hunger, cold, bankruptcy, and failure. Some of the women followed fathers, husbands, or brothers. A small number went on their own, to the dismay of most of the men.
I hope you enjoy this peek into America's history. Here's the blurb:
She’s out to prove herself. He’s only looking for adventure. Neither one realizes they’ll find more than gold “in them thar hills.”
Tegan Llewellyn has always been different than her adopted family, except Grandmother Hannah, a prospector during the 1829 Georgia gold rush. Now, seventy years later there are reports of gold in Nome, and the opportunity is too good to pass up. But Tegan doesn’t count on the dangers that strike from the moment she steps off the steamer, including the threat of losing her heart.
Elijah Hunter has prospected for gold all over the US and Canada and likes being on the move. The last thing he expects to find on his latest search is a lady miner who proves to be nothing but trouble. Can he convince her that leaving is for her own good before it’s too late...for both of them?
Gold Rush Bride Tegan is part of the exciting multi-author Gold Rush Brides series set in 19th century America. First, there was Hannah, then Caroline, and now Tegan. If you enjoy clean romances with a taste of intrigue, you’re sure to enjoy this series of books. You might even catch some gold fever of your own.
Purchase Link: https://amzn.to/3gqoFvj
Posted by Linda Matchett at 1:30 AM