Traveling Tuesday: Steaming to Nome
“At 3 o’clock this morning, the steamship Portland, from St. Michaels for Seattle, passed up [Puget] sound with more than a ton of gold onboard and 68 passengers.”
July 17, 1897, Seattle Post-Intelligencer 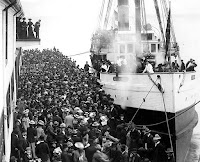 Three days prior to when they article ran, the SS Excelsior arrived in San Francisco with over $500,000 worth of gold. These two reports prompted an immediate stampede to Nome, Alaska by thousands of men and women to seek their fortune. The percentage of those who “struck it rich” was small, with merchants, suppliers, and service providers often earning more than the miners.
Before they could dig for gold, the miners had to find a way to the gold fields. The land route was long and treacherous. Travelers on this course had the choice of carrying several hundred tons of foods and necessities with them or purchasing the items at exorbitant rates upon their arrival. Most prospectors elected to make the trip via steamship, either from San Francisco or Seattle. 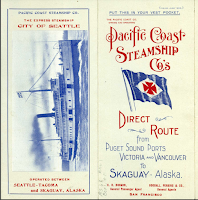 Between July and December, over 8,000 people steamed north out of Washington. Even more flocked from San Francisco. Alaska Steamship Company (1 ship) and Pacific Coast Steamship (4 ships) soon faced heavy competition as more shipping companies created routes to ferry passengers to Nome. The existing companies as well as the new companies scrambled to find ships to send to Alaska. Fares plunged by mid-April as the contest to entice miners continued.
The aforementioned SS Portland was constructed at Bath Iron Works in Bath, Maine in 1895 and originally christened Haytian Republic. Before its illustrious voyage to deliver nearly one million dollars worth of gold to Seattle, the vessel was a known opium runner and Chinese smuggler. Another ship, the SS Hassler was renamed Clara Nevada and ran service between Seattle, Skagway, and Dyea with room for one hundred first-class passengers, one hundred in steerage, and three hundred tons of freight. Unfortunately, the ship completed only one round trip before becoming victim to one of the worst gold rush marine disasters when she struck an unchartered rock near Eldred Rock and sank with no survivors.

As the rush continued, reports indicate it became difficult to secure passage as evidenced by another Seattle-Intelligencer article (January 1, 1901) that told about Sarah A. Menagh who paid $100 for a first-class ticket and ended up using a bathtub as her stateroom. According to the essay, she was thrown out of the tub by a “sudden jar” and sustained injuries that confined her to bed for twenty-five days. She sued the owners of the ship for damages of $1,896. It is unclear if she won her case.
_____________________
Gold Rush Bride Tegan

She’s out to prove herself. He’s only looking for adventure. Neither one realizes they’ll find more than gold “in them thar hills.”
Tegan Llewellyn has always been different than her adopted family, except Grandmother Hannah, a prospector during the 1829 Georgia gold rush. Now, seventy years later there are reports of gold in Nome, and the opportunity is too good to pass up. But Tegan doesn’t count on the dangers that strike from the moment she steps off the steamer, including the threat of losing her heart.
Elijah Hunter has prospected for gold all over the US and Canada and likes being on the move. The last thing he expects to find on his latest search is a lady miner who proves to be nothing but trouble. Can he convince her that leaving is for her own good before it’s too late...for both of them?
Purchase Link: https://amzn.to/3H6cT42
Posted by Linda Matchett at 1:30 AM