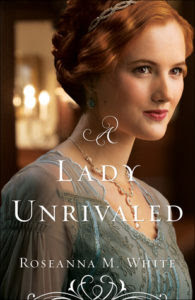 Amid the Unforgettable Cotswolds, the Final Grasp for the Fire Eyes Diamonds Could Threaten Them All

Lady Ella Myerston can always find a reason to smile–even if it’s just in hope that tomorrow will be better than today. All her life everyone has tried to protect her from the realities of the world, but Ella knows very well how the dangerous Fire Eyes diamonds have haunted her brother and their friends, and she won’t wait for it to strike again. She intends to take action . . . and if that happens to involve an adventurous trip to the Cotswolds, then so much the better.

Lord James Cayton has already broken two hearts, including that of his first wife, who died before he could convince himself to love her. Now he’s determined to live a better life . . . but that proves complicated when old acquaintances pull Cayton into their desperate attempt to seize the jewels. He does his best to remove the intriguing Lady Ella from danger, but the stubborn girl won’t budge. How else can he redeem himself, though, but by saving her–and his daughter–from those intent to destroy them all?


A Lady Unrivaled successfully concludes the Ladies of the Manor series. Easily read as a stand-alone, there are a few spoilers for the first two novels, but rather than detracting from the story, they served to intrigue and interest me in reading books 1 and 2. I don't read a lot of Edwardian era novels, so the list of characters and their titles was a helpful addition. I appreciated Ella's struggles and efforts to be taken seriously, and it was a joy to watch her come into her own by the end. Clayton's unique blend of involvement in his infant daughter's life, hobby as an artist, and attempts to overcome his dark history created a well-developed character who I liked immensely. As a regular reader of mysteries I was able to follow the subtle clues to discover the identity of the hidden villain who was a great mix of charming and creepy. A highly enjoyable read.

I received a free copy of this book in exchange for my honest review.

Roseanna M. White pens her novels beneath her Betsy Ross flag, with her Jane Austen action figure watching over her. When not writing fiction, she’s homeschooling her two children, editing and designing, and pretending her house will clean itself. Roseanna is the author of a slew of historical novels and novellas, ranging from biblical fiction to American-set romances to Edwardian British romances. She makes her home in the breathtaking mountains of West Virginia. You can learn more about her and her stories at www.RoseannaMWhite.com.

Back in 2008, I went to my first writers conference, where I met my current best friend and critique partner. I’d been pitching the first book in a series I was rewriting from my childhood, so this was the first project of mine our newly formed critique group did together. Specifically, the third book in the series, which I was then calling Diamond Blaze.

It was about a girl very much like me. Optimistic in the extreme. Always looking for a reason to smile. Her name was Lady Ella Myerston, and though she was the heroine in the third novel in a series—friend to heroine from book 1 and sister of hero in book 2—Ella stood on her own. Or I hoped she did. You see, it’s not very often I try to write a character so much like me, and I wasn’t sure what my new critique partners would think.

I was delighted and relieved when my critters, as I call them, loved her—it felt a little like them loving me. 😉 With Stephanie, that BFF/critique partner, Ella became part of our language. “That’s so Ella” meant “that’s so hopefully and optimistic.” It’s a phrase we used for years, long after that series got shelved and we focused on other projects.

When I finally sold a rewrite of the first book to Bethany House and The Lost Heiress released last September, I was so excited to get to breathe new life into the other books in the series as well. I gave some new twists and turns to Brice’s and Rowena’s story in The Reluctant Duchess, took it to new depths, but it was still largely the story I’d first written seven years before.

Ella’s story, though . . . we eventually settled on the title A Lady Unrivaled, but it was the hardest one in the series for us to name. And writing! Ella’s story didn’t work anymore as I’d had it. I had to toss out the entire thing and start fresh, with a new premise and new plot. But Ella—Ella had to remain Ella. I learned more about her as I rewrote the series, of course, and I added a few things not like me, naturally. But Ella still seeks a reason to smile, always. She still believes in hope, in every situation. And her knack for misplacing things—herself included—might be borrowed (and exaggerated) from my remarkable ability to lose things that I sat down right there two minutes ago.

Ella got new adventures, new goals, new excitement in her life—but she’s still the Ella I got to know all those years ago. And her hero, Cayton, is still the sometimes surly, too-realistic, very different-from-Ella man he has to be to counteract her.

My editor, in her notes to me, said, “Cayton and Ella are so very different. In a way, you wonder how they’ll make it work. And yet you can’t help think they will, and want them to.”

The love story in this book is partly mine, too. Because though on the surface my husband isn’t much like Cayton, in the ways that matters, he is. He’s my opposite, but my perfect complement. He doesn’t always see the bright side I cling to, but he’d never ask me not to cling on anyway. We view the world very differently—and can face it because we’re together.

I love all my books, all my characters. But A Lady Unrivaled . . . well, it’s just so very Ella. I hope you love it just a fraction as much as I do!

I’m giving away a complete set of the Ladies of the Manor Series PLUS a special surprise straight from England! (US addresses only for paperbacks; an international winner is eligible for digital gifts, though!)
https://www.rafflecopter.com/rafl/display/e146afbf28/?