When most people think of forensics, they think of bodies and blood, guns and bullet wounds, tool marks, poison, murder, footprints, and fingerprints. Certainly, those are pieces of evidence that forensic scientists study on a regular basis.

However, there are also non-violent, even subtle items that are just as dangerous to their victims. Nowadays computers are used to commit the same crimes, but not too many years ago criminals used paper to perform these egregious acts. Ransom notes, hold-up notes, extortion notes, altered business records, bogus checks and counterfeit bills. They can be documents needing proof of genuineness or forgery such as wills, contracts, deeds, charge slips, lottery tickets, insurance forms, or medical records. 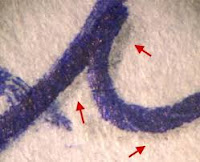 If you've ever watched the National Treasure movies, you saw the main characters try to prove the veracity of documents. They also found a secret code using lemon juice and a hair dryer. Does that work? Perhaps if Mythbusters were still around, we could find out.

According to the American Board of Forensic Document Examiners the definition of forensic document examination "relates to the identification of handwriting, typewriting, the authenticity of signatures, alterations in documents, the significance of inks and papers, photocopying processes, writing instruments, sequence of writings and other elements of a document." 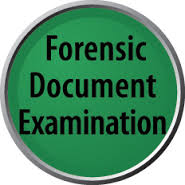 Document examiners compare colors, sizes, shapes, and inconspicuous microscopic items. Micro chemical analysis is used during ink identifications and ink comparisons. Handwriting analysis is large part of a forensic document examiners job. The scientist does not use the word forgery which implies intent. Rather their report may read: "The questioned John Doe signature on the contract is not the genuine signature of John Doe. It is a signature written by some other writer who attempted to imitate the genuine signature of John Doe."

Here are some of the questions that might be asked during a document examination:


This is a fascinating area of study. Lots of room for plot development too!
Posted by Linda Matchett at 1:00 AM