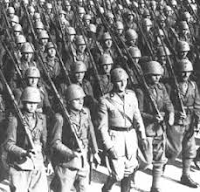 Between the 1870 and 1900, European countries used imperialist aggression, diplomatic pressures, and military invasions to colonize Africa. As a result, at the height of African colonization, seven different countries owned pieces of the continent.


Libya had been occupied by Italy since 1912 as an “economic expansion.” A few years prior to WWII, Mussolini sent thousands of Italians, mostly farmers and other rural type workers, to the country. But the dictator wanted more, specifically countries that had been part of the “old Roman empire.” The apple of his eye was Egypt.

However, he had a problem. As part of a 1936 treaty, British troops occupied Egypt to protect the Suez Canal and the Royal Naval bases in Alexandria and Port Said. But this was September 1940, and the London Blitz had commenced. Also Mussolini thought a German invasion of England was imminent. So he hedged his bets that the British troops would be vulnerable, and on September 13, 1940 sent his forces into Egypt. 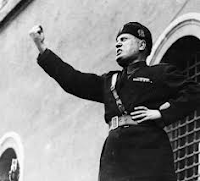 Fighting primarily took place in the Western desert, and the Italians eventually captured Sidi Barrani where they left six divisions. But as with many wars, the tide changed, and two months later the British attacked the Italian camps. In three days, they took more than 40,000 Italian prisoners. By January 1941, the British had advanced and took another 35,000 prisoners. By February Italians were surrendering in droves. But once again the tide turned, and it would be another two years before the British gained success against Italy in Africa.
Posted by Linda Matchett at 1:00 AM