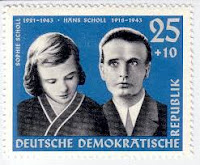 Unlike resistance groups from the Allied countries during WWII, there was no united, formal resistance movement within Germany. Opposition was carried out by individuals and small groups. Over the course of the war, nearly 75,000 people were executed for their part (real or imagined) in going against the Nazis. Opposition took many forms. Some was covert such as hiding Jews and other targeted populations or the publication of anti-Nazi leaflets and newspapers. Some was more obvious such as outspoken criticism of Hitler and various assassination attempts.

Adults were not the only individuals who were against the Nazi oppression. Youth of all ages participated in resistance as well. The White Rose group operated for a short time between 1942 and 1943. The group coordinated efforts on the University of Munich campus for civil rights and opposition to Nazi policies. A non-violent group, their activities were weekly discussion groups, painting “freedom” on brick walls, and distributing leaflets explaining their stand against the Nazis on moral and political grounds.

Founded by five students and their philosophy professor, they produced six pamphlets that were left in telephone books in public phone booths, mailed to professors and students, and taken to other universities for distribution. It is estimated that only one hundred or so of these leaflets were distributed.

The group was caught when the University’s custodian witnessed one of the members tossing leaflets from the top of one of the buildings on campus. They were arrested and questioned for four days. Their trial was swift and a token event. Declared guilty within moment of deliberation, the founders were executed a few days later.

White Rose members who were not caught hoped the executions would stir up further resistance, but to their dismay life at the university carried on as usual. The movement lost impetus and faded into obscurity. After the war, the group’s efforts were praised, but of course, by then it was too late.
Posted by Linda Matchett at 1:00 AM