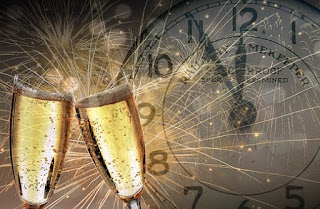 As I approached the new year, I got to wondering about mysteries that were set during New Year's Eve. Turns out there are lots! Rather than provide a laundry list, because there are plenty of those around, I decided to focus on The Clock Strikes Twelve by Patricia Wentworth.

Wentworth, who is one of the Golden Age of Detective Era authors, was born in 1877 as Dora Amy Elles in India where her father, British General Edmond Elles served. She was tutored as a child then attended Blackheath High School for girls in London. She was married twice, having been widowed when her first husband, George Dillon died in 1906.

A prolific author, she published her first two novels in 1910. She went on to write nearly seventy novels; thirty-two in the Miss Silvers series and thirty-four standalones. 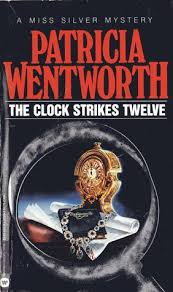 The Clock Strikes Twelve, the 7th Miss Silver book, was published in 1944, and is a fun read no matter what time of the year.

The victim, James Paradine, apparently has a death wish. He brings together ten of his family
members and announces that he knows someone in the group has a guilty secret and that he'll be waiting in his study until midnight for the person to come and admit to their deed. It's no surprise when he turns up dead, having been pushed out the window.

Unlike Miss Marple, who allows her compatriots to do the crime solving around her, Miss Silver, a retired governess, jumps directly into the investigation. She manages to sift through the parade of possible suspects all while trying to determine which wool to select in knitting a child's jacket. The "locked room" mystery (one in which there is a restricted location and a definitive number of suspects) is an oft-used plot line in classic mysteries, and this one is well-done. The characters are interesting and a couple of sub-plots at depth.

Available on Amazon and other book sites, The Clock Strikes Twelve is a great way to ring in the New Year.