Here in the Northeast almost everyone crosses their fingers for a white Christmas. Most years it happens – this year we got our first snow at the beginning of November and it's been snowing ever since. We anticipate a White Christmas. Other years we barely get any snow – like 2001 when nearly every outdoor snow or cold-related event was canceled. More often than not, unless I'm traveling for the holidays, I don't give the weather too much thought.

Not so for the Allied troops hemmed in on all sides by German soldiers in December 1944.

After the successful landings at Normandy in June 1944, the Allied soldiers pushed toward Germany and made better time than expected. Because troops were fatigued by weeks of continuous combat, supply lines were stretched extremely thin, and supplies were dangerously depleted this was not the good news one would think. Eisenhower analyzed the situation and decided to stay put in the Ardennes region of Belgium. He felt that fewer troops would be needed to defend the area.

However, blizzards and freezing rain often reduced visibility to almost zero. Frost covered much of the soldiers’ equipment, and tanks had to be chiseled out of ice after they froze to the ground overnight. A turning point in the war, the Battle of the Bulge lasted from December 16, 1944 to January 25, 1945.

To the U.S.A. Commander of the encircled town of Bastogne.

The fortune of war is changing. This time the U.S.A. forces in and near Bastogne have been encircled by strong German armored units. More German armored units have crossed the river Our near Ortheuville, have taken Marche and reached St. Hubert by passing through Hompre-Sibret-Tillet. Libramont is in German hands.

There is only one possibility to save the encircled U.S.A. troops from total annihilation: that is the honorable surrender of the encircled town. In order to think it over a term of two hours will be granted beginning with the presentation of this note.

If this proposal should be rejected one German Artillery Corps and six heavy A. A. Battalions are ready to annihilate the U.S.A. troops in and near Bastogne. The order for firing will be given immediately after this two hours term.

All the serious civilian losses caused by this artillery fire would not correspond with the well-known American humanity.

Not one to use profanity, McAuliffe sent the following reply:

To the German Commander. 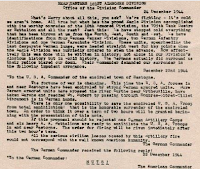 McAuliffe then sent a memo to his troops, notifying them of his refusal to surrender. He included a copy of his reply to the Germans. Despite the dire circumstances, reports indicate that morale skyrocketed, and the soldiers vowed to win at all costs.

Fortunately, relief troops and supplies arrived the day after Christmas. The battle continued, and the Allies ultimately won.


Have you ever suffered a exceptionally difficult Christmas season?
Posted by Linda Matchett at 1:30 AM