Much is made over the French Resistance, and the thousands of French citizens who put their lives on the line to fight German Occupation. Less well-known are the activities of the men and women of the Italian Resistance.

An intriguing aspect of the Italian Resistance is that in some ways it was a Civil War. Members not only faced “faceless” enemies, but also neighbors, friends, and family members who stood behind the Nazi-Fascist cause. This added a personal level to the conflict that many have never forgotten. At its peak, the Resistance boasted somewhere around 300,000 members who opposed occupying German forces as well as Mussolini’s Fascist government.

One of the most famous incidents occurred at Piombino after the armistice. German forces made their way to the town, and citizens asked the Italian Army to respond, but despite hostility shown by the Germans indicating they planned to occupy Piombino, General DeVecchio commanded his troops not to intervene. Junior officers went against orders and outfitted the townspeople with weapons. The Germans were repelled and taken prisoner, but again DeVecchio stepped in and freed the prisoners. Senior Italian commanders fled the city and the troops disbanded, allowing the Germans to take over the city. 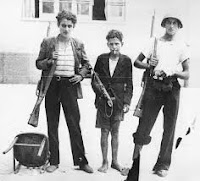 Soldiers, sailors, and airmen retreated to the nearby forests and formed several partisan units. Armed resistance involved ambushing and harassing the Germans and their allies through the use of guerilla tactics. Supported by locals with food, blankets, medicine and other supplies, the partisans would provide citizens with “promissory notes” that could be redeemed after the war. Other types of resistance were aid networks that assisted escaped POWs to reach Switzerland or Allied lines. Italian Jews were assisted by the Delegation for the Assistance of Jewish Emigrants with food, shelter, and money.

A brave group of men and women, the Resistance lost approximately 50,000 over the course of the war.