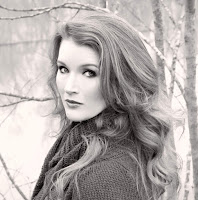 Linda:  Thanks for joining me today. Congratulations on your debut novel Loving Grace. What was your inspiration for the story?

April: Thanks for having me! I’m happy to be here. As far as inspiration goes, I knew I wanted to write Christian fiction for teens pretty much from the start of my writing adventure. That part was easy. Figuring out where I wanted the story to take place was also a pretty easy choice for me to make. All of these one liners (mostly said by Grace) kept popping into my mind. And because most of the things were in some way related to a watermelon farm or a watermelon queen, I knew where Grace’s story would take place. So in some ways, the inspiration came from my time working in my best friend’s family watermelon farm during the summer and my time as a watermelon queen.

April: For the most part I’m very much so a planner. I have a color coded outline and each scene is mapped out. I use a notebook for each manuscript, and I record things that I might need to remember or pictures I see that inspire me for a particular scene. I like to see where the story is going and know what my ending will look like too. But with that being said, it’s very important to leave yourself room as a writer for inspiration.  Even with Grace’s story, entire scenes got switched around from their original outlined order. Some scenes were not even in the original outline, but I’m thankful that I allowed myself a little bit a “pantster” attitude so that when inspiration hit I was free to go with it. This is also one of the things I like most about writing—getting an idea and seeing where it takes the story.

April: Well, it really started in high school when my high school English teacher saw something in my writing. And then again in college when one of my professors mentioned it. And then as a middle school English teacher myself, writing is pretty much a large part of my day—every day. But as far as writing my manuscript, it started a couple of years ago when I was reading a book, and it inspired me, that maybe I could do this too. I knew I wanted to write Christian fiction, and that I wanted to write for teens. So I wrote a manuscript, went to a conference, had the manuscript critiqued, and most excitingly of all, the person doing the critique liked it! That gave me the courage to submit it, and to begin the road to publication.

LM: Other than being a watermelon queen, is there any part of yourself in Grace?

April: I wouldn’t say there is any particular part of me in Grace. I do always try/hope to create characters that people can identify with though.

April:
Favorite childhood book: The Secret Garden.
Favorite food: Watermelon salsa…it’s the truth, that stuff is so good.
Favorite vacation place: The beach! Warm sand and the sound of crashing waves is my favorite way to relax.

April: I’m working on two right now. One that is also set in the world of watermelons. There are some new characters as well as old characters in that one. The other one is about two totally different people who have to work together to achieve their separate but equally important goals.

Grace Summer lands herself in a melon load of trouble when she becomes torn between the boy of her dreams and the boy almost next door. As the newly-crowned watermelon queen, she is thrust into the spotlight, meets the dreamy Warren Hartley, and continues trying to get oven an accident that rocked her world. Mix in working with Beau Baron who Grace happens to fight with just about as much as breathing and the metaphorical sparks fly.

Like most things in life, Grace must learn to take the good with the bad. While the good is the handsome and fun Warren Hartley, the bad is Beau Baron—or at least being around his annoying and rude self way more than she would like. For Beau, Grace is nothing more than aggravating and an irritating reminder from the night of the accident. Tensions soar as Grace and Beau fight to love themselves and maybe, just maybe, each other.