Traveling Tuesday: Connecticut Does its Bit

Traveling Tuesday: Connecticut Does its Bit

Despite being the third smallest state, Connecticut is geographically diverse, creating a variety of industry opportunities. With its location on the Long Island Sound as well as the Connecticut and Thames Rivers, the state also has a long maritime history. Originally settled by the Dutch, Connecticut became the fifth state of the union and is named for an Algonquin word meaning “long tidal river.”

Well-known for its housing of financial and insurance industry companies, Connecticut also hosts myriad companies who converted their production facilities to manufacture war materiel. The state produced approximately four percent of the country’s military armaments, putting it ninth on the list among the forty-eight states (remember, Alaska and Hawaii didn’t become states until 1959). 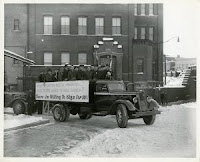 With the U.S. Coast Guard Academy located in New London, thousands of seamen were trained. In addition, there were several Naval, Army, and Army Air Force installations throughout the state.
Like other states, Connecticut saved its scrap, purchased war bonds, collected blood, and rolled bandages. Blackout curtains were installed, plane spotters volunteered, and air raid wardens walked their posts. Women joined the uniformed auxiliary services and went to work in the factories. 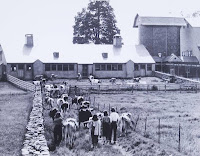 They also headed to the fields. The Women’s Land Army put about 20,000 Farmerettes to work during WWII. Mrs. Joseph Alsop reorganized the WLA in 1942 through of the University of Connecticut. Success was immediate. With only eight days notice, a group of 80 workers picked 50,000 quarts of strawberries. Vegetables were picked in Southington and apples in Litchfield.

A small state, but a big contribution. Have you ever visited Connecticut?