Despite being one of the less populated of the United States, Vermont played an important role in WWII. Having already declared war by the autumn of 1940 they entered the war a full year before the rest of the country.

As soon as the Selective Service Act was enacted, Vermont men began to receive their draft notices, and within weeks Fort Ethan Allen was expanded to house the 1,700 draftees, mostly from the Vermont National Guard. Over the course of the war, 50,000 young men and women would serve in the Armed Forces-nearly 15% of the state’s population. 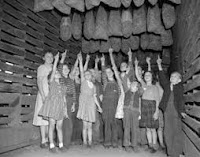 The state also “did its bit” to support the war financially, purchasing $263,500,000 worth of bonds. Like others around the nation, they practiced air raid maneuvers, acted as plane spotters, collected milkweed pods for flotation devices, knitted sweaters and socks, rolled bandages and collected scrap iron, aluminum, paper, and rubber. So tenacious about their collecting that by the second half of 1943, they led the country with a per capita rate of 162.9 pounds per person!

Vermont industry boomed during the war, and many organizations adapted their equipment to produce armaments and parts, packing boxes, anchor chains, bumpers, boats, and uniforms. The agricultural industry also increased because of the extra demand for milk, eggs, poultry, and maple products. In addition to Fort Ethan Allen, used to drill National Guardsmen as well as train troops for artillery spotting, there were numerous Army Air Force air fields throughout the state.

High school students were used to fill the void left by men in the fields. School sessions were held from 8:00 AM until noon, and then pupils were trucked to the farms to help with the harvest. They dug potatoes, and picked strawberries, beans, and other produce which was then shipped to canneries.

From young people to retirees, Vermont served in many ways.