Thanks to novelist Dashiell Hammett (whose 125th birthday past last month), hard-boiled detective fiction came into its own during the 1930s. Devised a decade earlier by Carroll John Daly, the genre typically features an anti-hero protagonist, such as Sam Spade, Philip Marlow, and Mike Hammer, organized crime, prohibition, a corrupt legal system, and inept police departments.

Hammett’s last fiction book was The Thin Man and featured Nick Charles, reluctant detective. First published in Redbook Magazine in 1933, the story came out in book-form the following year. The difference about Nick Charles is his “soft, gooey inside.” He may be a serious, yet cynical PI, but when it comes to his wife Nora, he’s solicitous, loving, and overly affectionate. At the time, their witty banter was a new twist in the genre not seen in Chandler, Greene, or prior Hammett novels. 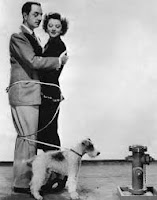 Hollywood knew a hit when they saw one, and they eagerly offered the author $40,000 for the rights to the characters that scholars posit were based on Hammett himself and his mistress Lillian Hellman. Two sequels followed the first, but the remaining three movies were not made until after WWII (when Myrna Loy returned to Hollywood after leaving to serve with the Red Cross).

Initially serving on the “Keep America Out of War Committee,” Hammett attempted to re-enlist after the attack on Pearl Harbor. According to one source, he was “a WWI veteran, a victim of tuberculosis, and a Communist, but he pulled strings and managed to be admitted.” However he managed to get in, he was stationed in the Aleutian Islands where he edited an Army newspaper The Adakian. Later, he co-authored a book The Battle of the Aleutians with Cpl. Robert Colodny.

Hammett lived another twenty-five years after writing The Thin Man, but he never published another story.

May 1942: Geneva Alexander flees Philadelphia and joins the USO to escape the engagement her parents have arranged for her, only to wind up as the number one suspect in her betrothed’s murder investigation. Diagnosed with a degenerative eye disease, she must find the real killer before she loses her sight…or is convicted for a crime she didn’t commit.

Set in the early days of America’s entry into WWII and featuring cameo appearances from Hollywood stars, Murder of Convenience is a tribute to individuals who served on the home front, especially those who did so in spite of personal difficulties, reminding us that service always comes as a result of sacrifice. Betrayal, blackmail, and a barrage of unanswered questions… Murder of Convenience is the first in Linda Shenton Matchett’s exciting “Women of Courage” series.