As someone who suffers from claustrophobia, I can’t imagine enduring a night in a bomb shelter let alone weeks or months. However, that’s what folks in Britain experienced during World War II.

In cities such as London, the population would often hide out in Tube stations, tunnels, railway arches, or basements available under some of the larger buildings, but for most people personal shelters were the only option.

Dark and damp, the shelters measured six-and-a-half feet by four-and-a-half feet. They tended to flood if built in low-lying areas, and the design didn’t keep out the sound of the bombings, probably making it tough to sleep.

Anyone earning £5 a week (the equivalent of £300) or more could purchase an Anderson Shelter for £7, which may not seem like a lot of money, but consider that the amount is twenty-five percent of their monthly salary. A large, but necessary expense. Shelters were given to families who earned less than £5 weekly.

An interesting fact to note is that the shelter was designed in 1938 by William Paterson and Oscar Kerrison in response to a request from the Home Office. Obviously, they didn’t believe Chamberlin was going to be successful negotiating “peace in our time.” Named for Sir John Anderson, Lord Privy Seal who had the responsibility of preparing air-raid precautions, the shelters could hold up to six occupants.

The shelters were purchased or distributed unassembled so it was up to the families to build them. By all accounts, the shelters were easy to build and featured six corrugated steel panels that curved and were bolted together at the top. Three straight sheets were used on the sides with two more straight panels on each end, one of which contained the door. They were buried up to four feet into the ground hen covered with a minimum of fifteen inches of soil which could then be planted with flowers or vegetables. Some people built them inside their homes and covered them with sandbags. 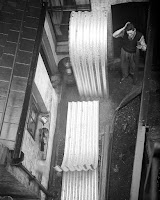 More than 1.5 million shelters were distributed to people in areas considered at risk for German bombing. The first shelter was built in an Islington, London garden in February 25, 1939. An additional 2.1 million were constructed over the course of the war. However, indications are that only about twenty-five percent of the population regularly used one.

At the end of the war, households who received an Anderson shelter were expected to dismantle it and turn it in to local authorities. Folks who wanted to keep it (providing them with valuable metal) could pay a small fee.

Want to see a replica? Visit the Tillamook Air Museum in Oregon.

Set in 1942, Under Fire tells the story of Ruth Brown whose missing sister, Jane, is declared dead. Convinced her sister is still alive, Ruth follows clues from their small New Hampshire town to war-torn London trying to find her. Discovering that Jane has been murdered results in a faith crisis for Ruth, and she decides she must find Jane’s killer.