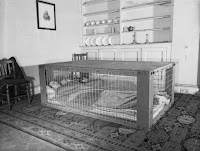 Last week, I looked at the use of Anderson bomb shelters in Britain during WWII. Devised in March 1941 and named for Herbert Morrison, the Minister of Home Security at the time, the Morrison Shelter was a solution for people who didn’t have an outdoor location suitable for an Anderson Shelter.

Like the Anderson, the Morrison shelter came in a kit that was assembled once brought into the house. The completed size was six-feet-six-inches long, four feet wide, and two-feet-six-inches high. The sides were welded wire “mesh” sides with a solid 1/8 inch (3 mm) steel plate “table” top and metal “mattress” type floor. Three tools were supplied with the kit to put together the more than 350 parts. Occupancy was rated at four adults, although many anecdotes exist that tell of many more people jammed inside. A “double decker” version came out later.

Also like the Anderson, the Morrison shelter cost £7, but was distributed for free to members of the public who earned less than £350 per year. Half a million shelters had been distributed by the end of 1941, and one of the first Morrison’s to be installed was at 10 Downing Street (the Prime Minister’s office).

In his 1960 autobiography, Herbert Morrison states: “The experts – engineers and scientists – would have argued for weeks {about the design}. However, I told them that I intended to lock them up in a room until they agreed, promising to arrange to send food into them. I reported to Churchill that I had taken this attitude and he was delighted, saying that he would back me to the limit. The experts had their designs agreed upon and completed within twenty-four hours. So was born what became known as the Morrison table shelter.”

Advertising claimed the shelter was “good for table tennis and it made a find den for children’s games.” It also doubled as a table in many homes.

A concern by many people was being trapped inside the Morrison if a house collapsed during a bombing raid. Hence, families often had an Anderson shelter as well if they had the outside space.

Which shelter would you prefer?

Love's Harvest, a modern retelling of the biblical story of Ruth takes place in London during the early part of WWII. The first in my Wartime Brides series, the novella is Permafree on Amazon, Kobo, and Apple Books. Download your copy today.

Noreen Hirsch loses everything including her husband and two sons. Then her adopted country goes to war with her homeland. Has God abandoned her?

Rosa Hirsch barely adjusts to being a bride before she is widowed. She gives up her citizenship to accompany her mother-in-law to her home country. Can Rosa find acceptance among strangers who hate her belligerent nation?

Basil Quincey is rich beyond his wildest dreams, but loneliness stalks him. Can he find a woman who loves him and not his money?

Three people. One God who can raise hope from the ashes of despair.

“For I know the plans I have for you,” declares the Lord, “plans for welfare and not calamity, to give you a future and a hope.” (Jeremiah 29:11 NASB)