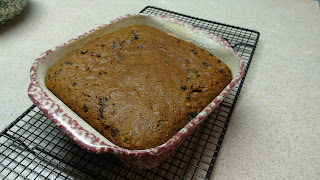 Here's this week's recipe from Betty Crocker's "Your Share," published by General Mills in 1943. An eggless, milkless, butterless cake. I've made this several times. Believe it or not, it's delicious!

Boil for three (3) minutes, then cool.

Pour into greased and floured 8X8 pan. Bake about 50 minutes at 325 degrees.

It's very tasty uniced, or you can sprinkle powdered sugar over it.

Posted by Linda Matchett at 6:42 AM