Mystery Monday: The Pinkerton Agency and its Early Years

Mystery Monday:
The Pinkerton Agency and Its Early Years 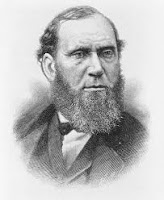 I’ve always been intrigued by the Pinkerton Detective Agency. Founded in 1850, by Scotsman Allan Pinkerton, only eight years after he emigrated to the United States, the agency still exists as a subsidiary of the Swedish company Securitas AB. Leaving school at the age of ten after his father died, Pinkerton was primarily self-taught and by all reports a voracious reader. He was a cooper by trade, and his job is the reason he became a detective (albeit by accident).

While in the woods looking for trees appropriate for use as barrel staves, he came upon a gang of counterfeiters. As the story goes, he watched their movements for a long time then snuck away to inform the local sheriff who arrested the men. As a result Pinkerton was appointed the first police detective in Chicago. The following year he partnered with Edward Rucker to open the North-Western Policy Agency, later becoming Pinkerton & Co. 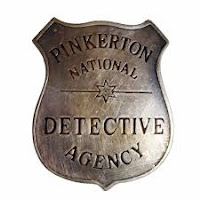 During the first two years of the Civil War, Pinkerton was head of the Union Intelligence Service. Part of his duties were to guard President Lincoln, and it was said that on one particular trip, Pinkerton thwarted an assassination attempt. He went undercover for the remainder of the war, often working in the deep south to determine Confederate plans. This counterintelligence work is comparable to the work done by today’s US Army Counterintelligence Special Agents in which Pinkerton’s agency is considered an early predecessor. After the war, the agency continued to track down train robbers, outlaws, and gangs as well as work heavily against the labor movement.

The agency’s logo of a large unblinking eye with the tagline “we never sleep,” gave rise to the nickname private eye for detectives. Pinkerton is also noted for hiring the first female detective, Kate Warne, a widow who convinced the Scotsman that she could “worm out secrets in many places to which it was impossible for male detectives to gain access.” Pinkerton would later declare her one of his best investigators.

At the time of his death in 1884, Pinkerton was working on a system to centralize all criminal identification records (such as mug shots, case histories, suspects’ distinguishing marks and scars, newspaper clipping, raps sheets, known associates and areas of expertise.

Stop by next Monday to learn more.