When you feel you can never lift your head again, what means the most? When you’re so anxious your heartbeat sounds in your ears or when your pain seems unbearable, where do you turn?

Educator and author Parker Palmer shares his experience from the darkest days of clinical depression when a friend simply massaged his feet. Few or no words were spoken. That presence meant the world, and he said, "...somehow he found the one place in my body where I could feel a sense of connection with another person, relieving my awful sense of isolation while bearing silent witness to my condition. ... He was present—simply and fully present.... We have something better [than fixing another person]: our gift of self in the form of personal presence and attention, the kind that invites the other's soul to show up."
https://onbeing.org/blog/the-gift-of-presence-the-perils-of-advice/ 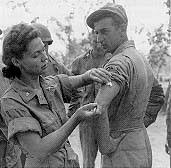 This gift of presence cannot be surpassed, and giving this gift provides satisfaction like no other. We know we’ve truly been there for someone and become better for it. We have seen into another’s heart . . . into their soul.

The besieged doctors and nurses moving with field and evacuation hospitals through World War II offered this gift. Often, they performed life-giving procedures that saved lives. In many other instances, they could only administer pain-killing drugs to ease a soldier’s agony.

But in both cases, they gave the precious gift of presence. It’s impossible to imagine what this meant to the wounded or those breathing their last. For family waiting back home, knowing their loved one sacrificed his life was a bitter pill: to think that someone stayed with him, touched him, heard his final words—what earthly value can we attach to this gift?

That’s the thing—it’s not an earthly value. These very spiritual actions made all the difference in the world…this world and the next. Dedicated nurses and docs supplied this gift, along with citizens all over the world tasked with keeping their communities safe throughout the war. 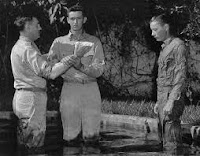 Police forces, emergency crews, volunteer workers, the clergy—they gave beyond their powers, over and over and over. I stand in awe of their sacrifices. As Until Then came together, entering into their worlds produced tears.

How did these ordinary people make it through the sheer misery of war? What part did faith play? How much did they doubt along the way? And what lasting consequences accompanied them the rest of their lives? Finally, how can we best honor them?

So many unanswered questions—but exploring them gives meaning to the gifts they gave.
Someone recently asked me why I write what I write, and it’s all about using the gifts I have to highlight their steadfast service. It’s about increasing awareness and appreciation. It’s about what really matters in the long run.

About Gail Kittleson: Since the World War II bug bit Gail, she’s never been quite the same. Her husband shares her delight in visiting historical sites. They also enjoy their grandchildren and gardening. Gail’s goal is to increase appreciation for veterans’ tremendous sacrifices and honor those who gave so much for the cause of freedom. 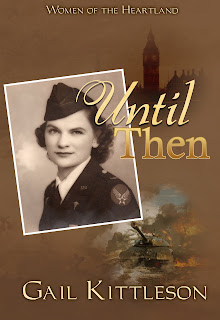 Shortly after a quarter past eight, a siren split the air. Marian Williams lifted her sleeping daughter from her bed and darted down stairs Her mother and father-in-law, off on air warden duty, had left the front door unlocked.

She hugged her youngest child close. The blackout made the going difficult, by her husband's instructions echoed in her brain: "Whatever you do, get down inside the station fast as you can."

She hoped for a spot near the canteen, with access to milk. Uneven light shone over the paved steps. Then she tripped. Her kneed hit the concrete, then something bashed her left side. Someone cried out. Another blow scraped her arm on the landing floor. Where was her baby? She attempted to get up, but an even heavier weight slammed her face down. A crushing burden descended, then all went black.

Riding in the backs of Army trucks across North Africa, throughout the Sicily campaign, up the boot of Italy, and northward through France into Germany, Dorothy Woebbeking served as a surgical nurse with the 11th Evacuation Hospital.

During World War II, US Army nurses worked and slept in tents through horrific weather, endured enemy fire, and even the disdain of their own superior officers who believed women had no place in war. But Dorothy and her comrades persevered, and their skills and upbeat attitude made a huge difference in the lives of thousands of wounded soldiers.

Dorothy and Marian's stories converge on a simple, hand-stitched handkerchief.

Purchase Link: https://amzn.to/2ZJhe7I
Posted by Linda Matchett at 1:30 AM