Couriers with the French Resistance

Couriers with the French Resistance 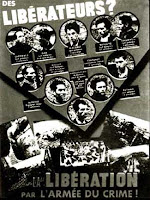 Signed by the French, the Armistice stipulated that “The French Government will forbid French citizens to fight against Germany in the service of States with which the German Reich is still at war. French citizens who violate this provision are to be treated by German troops as insurgents.”

Thousands of French men and women chose to ignore the mandate. The exact number of La Résistance members in France during WWII is unknown because many were never captured and even more never told their family about their involvement during the war. Activities included securing intelligence about German troop numbers and movements, sabotaging communication and train lines, blowing up bridges, kidnapped and killed German army officers, and ambushed German soldiers. Another important task performed by La Résistance was to courier downed airmen and escaped prisoners out of the country and into neutral Switzerland.

As mentioned in a previous post, several escape routes existed. However, rather than be given a map, the escapees were led out of the country by couriers, who were often natives of the area through which the route passed. Much like a relay race, the courier would take the individuals from Point A to Point B where the next courier would meet them and continue the journey. Both men and women acted as couriers.

With a fatality rate of 42%, couriers held a dangerous job. They came from all walks of life: housewives and mothers, society women, teachers, and shopkeepers. Couriers had to be in excellent physical condition because of the hundreds of miles they traveled back and forth over rough terrain, many of which went into the higher elevations.

A secret mission. A fake bride. A run for their lives.

According to the OSS training manual, the life expectancy of a radio operator in Nazi-occupied France is six weeks. Partnered with one of the agency’s top spies, Gerard Lucas, newly-minted agent Emily Strealer plans to beat those odds. Then their cover is blown and all bets are off. The border to neutral Switzerland is three hundred miles away—a long way to run with SS soldiers on their heels.

Will Emily and Gerard survive the journey?

And what about their hearts? Nothing in the manual prepared them for falling in love.