With over 2,200 continue hectares (nearly 5,500 acres or 22 square km), the Risoux forest is the largest forest in Europe. Forming a natural border between France and Switzerland, the forest lines the edge of the Vallée de Joux in the Jura Mountains. The Vallée is well-known for its watch and cheese making, but during WWII, the area became one of many routes used by fugitives from France into Switzerland. The border is a dry stone wall with Fleur-de-Lis decorating it and stands approximately three feet tall making escape was somewhat easy as long as German troops were avoided.

A group of French and Swiss friends became known as the Passeurs du Risoud and helped countless downed pilots, those in danger of deportation, and escaped prisoners make it over the border. In addition to smuggling humans, the group passed confidential documents about troop numbers and movements to the British Embassy in Lausanne as well as armaments.

To make it more difficult for the Nazis to track them, the Passeurs formed multiple routes through the forest, many of which are still apparent. Soldiers patrolled the French side of the forest twenty-four hours a day, and anyone found within the two kilometer forbidden zone was shot on sight. 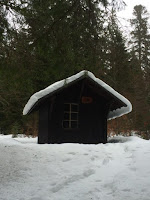 After arriving in Switzerland, the group would hide in one the two wooden huts (L’Hôtel d’Italie and Le Rendezvous des Sages) in order to rest. Then the Passeurs would go home under cover of darkness, and the escapees would continue the ten kilometer journey from the border to the place where they registered as illegal foreigners, then to an internment camp for the remainder of the war. Many downed military personnel did not register and continued their escape to Allied soil.

A secret mission. A fake bride. A run for their lives.

According to the OSS training manual, the life expectancy of a radio operator in Nazi-occupied France is six weeks. Partnered with one of the agency’s top spies, Gerard Lucas, newly-minted agent Emily Strealer plans to beat those odds. Then their cover is blown and all bets are off. The border to neutral Switzerland is three hundred miles away—a long way to run with SS soldiers on their heels.

Will Emily and Gerard survive the journey?

And what about their hearts? Nothing in the manual prepared them for falling in love.