Did you know that during World War II, Britain implemented conscription for women? Beginning in December 1941, single women and widows without children between the ages of twenty and thirty were called up. Later, the age was raised to forty-three, and women who’d served in WWI could be conscripted up the age of fifty.

Unlike the men, women could choose whether they worked in industry or joined one of the military auxiliary services. There were three such services: Auxiliary Territorial Service (ATS) (which is the one Princess Elizabeth chose), Women’s Auxiliary Air Force (WAAF), or Women’s Royal Naval Service (WRNS).

The WRNS (nicknamed Wrens) were first formed in 1917 for the First World War, then disbanded in 1919. Revived in 1939, the organization remained active until being integrated into the Royal Navy in 1993. During WWII, Wrens could be stationed “shore-based” which released men for service at sea and was a key recruiting tactic using the slogan Join the Wrens-Free a Man for the Fleet, or sent overseas. 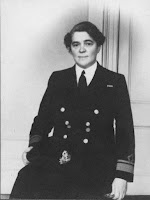 Vera Laughton Mathews, who had served with the WRNS during WWI, was appointed Director. Born Elvira Sibyl Marie Laughton in London on September 25, 1888 to Sir John Knox, a British naval historian and his second wife Maria Josefa of Spain, Vera was highly educated. She married Gordon Mathews in 1924 and was widowed in 1943.

At its peak, the Wrens had more than 75,000 members, of which one hundred lost their lives. An interesting film about the Wrens can be seen: https://www.youtube.com/watch?v=zVETAP4LDiE. Check out this blog for sketches made by Gladys Reed who served with the Wrens during WWII: https://slate.com/human-interest/2014/02/gladys-reed-sketches-of-life-as-a-wren-during-wwii.html.

About The Mechanic and The MD

All’s fair in love and war. Or so they say.
High school and college were a nightmare for Doris Strealer and being an adult isn’t much better. Men won’t date a woman of her height, and they don’t understand her desire to repair car engines rather than work as a nurse or a teacher. When her father’s garage closes, and no one will hire a female mechanic, she joins the Red Cross Motor Corps, finally feeling at home. Until she comes face to face with her past in the form of Ronald McCann, the most popular boy in school.
On the brink of a successful career as a surgeon, Ron’s plans crumble when he’s drafted and assigned to an evacuation hospital in England, the last place he expects to run into a former schoolmate. The gangly tomboy who was four years behind him in high school has transformed into a statuesque beauty, but a broken engagement in college leaves him with no desire to risk his heart ever again.
Will the hazards of war make or break a romance between this unlikely couple?