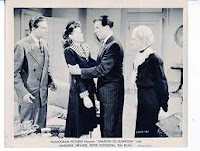 Movies produced in the 1930s and 1940s—the Golden Age—are my favorite, and recently I’ve been scouring a variety of sources to find lesser known films, many of which fall under the category of “B movies.” Unfortunately, the term B movie has become synonymous with poor quality, however, that was not the studios’ intent.

Shortly after the studios transitioned from silent to sound films, many exhibitors began to format their showings as double features. Highly popular, the double feature became a staple during the Golden Age, therefore, the studios had to produce a high number of these shorter, less expensive movies to occupy the bottom half of the program. Because of this, B movies comprised the majority of Hollywood production during this period. One movie scholar estimates there are more than four thousand pictures classifiable as B movies.

The Western was a Golden Age B movie staple, but there are also a significant number of comedy/mystery flicks that can be included in the mix. One of those comedy/mystery flicks, I tuned into most recently is Shadow of Suspicion, starring Peter Cookson and Marjorie Weaver, and directed by William Beaudine (nicknamed “One Shot” because he was known to shoot in one take).

Weighing in at only sixty-eight minutes rather than the standard ninety or one hundred, Shadow of Suspicion uses witty dialogue and clever misdirection to keep the viewer guessing as to the identity of the real culprit(s) of stolen jewelry. There are a couple of “aha” moments in the film, and several laugh-out-loud bits. The ending also comes as a surprise. 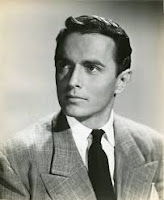 Peter Cookson, who got his start on stage and appeared in only thirteen movies from 1943 to 1947, moved into television in 1949 where he remained until the late 1960s. Marjorie Weaver appeared in dozens of movies, many of which were B movies and mysteries. She also appeared in two “war movies:” The Great Alaskan Mystery (1944) and Hollywood Victory Caravan (1945) a fundraising short produced by the U.S. Treasury.

What’s your favorite B movie?

The Widow & The War Correspondent (Sisters in Service, book 3)