Then the Great War (WWI) came and with it an explosion of print media. The industry now had a platform, and women began to seek opportunities to break into the quintessential male profession of war reporting. 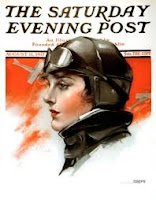 The military, however, had its own goals. It used the accreditation process as its first line of control over war correspondents, and the War Department refused outright to accredit women. Nevertheless, several women, despite being untrained as journalists, were sent to Europe to cover "the woman's side of the war." The Saturday Evening Post's editor, whose main readership was two million middle-class women, believed that there was a woman's point of view or "woman's angle." He also maintained that, "The big story of a war is never at the front. It is in the hospitals and in the homes." 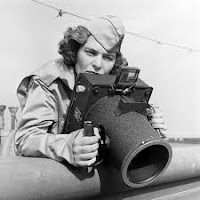 Once again, the military used the accreditation process to determine who could and couldn't cover the war. A lengthy process that required background checks on the application as well as his or her family, weeded out many candidates. According to Life photojournalist Margaret Bourke-White, "By the time you are accredited you have no secrets from the War Department and neither do your ancestors."

Accreditation acted as a contract: The Army or Navy transported correspondents into war zones, fed and sheltered them, and sent their dispatches home. In return, correspondents followed military law and censorship. Correspondents who defied rules lost credentials.

Nearly every commander in the Allied forces refused to allow women near combat. They feared women breaking under pressure (a fate that befell some men), balking at the lack of women's latrines, or influencing soldiers to take risks to protect them.

Needless to say, this frustrated most of the female reporters:

Journalist Martha Gellhorn (Ernest Hemingway's third wife) is considered by many to be one of the greatest war correspondents of the 20th century. She said, "I have too frequently received the impression that women war correspondents were an irritating nuisance. I wish to point out that none of us would have our jobs unless we knew how to do them and this curious condescending treatment is as ridiculous as it is undignified." 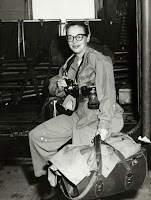 Journalist Dickey Chapelle who received accreditation to the Pacific Fleet and given the nominal rank of lieutenant commander said, "I want to go as far forward as you will let me." This attitude got her all the way to Iwo Jima. Later, she got an assignment to photograph the use of whole blood in saving lives. Chapelle saw action after she talked her way into land-based hospitals, following the blood. She was found, arrested, and evicted...after having gotten her story.

Martha Gellhorn's career lasted sixty years, and she covered nearly ever major event that occurred during that time. In order to reach the beach and report on the D-Day invasion, she sneaked aboard a hospital ship and hid in the bathroom during the entire voyage then impersonated a stretcher bearer. She got the story, but lost her credentials. Her response? "I followed the war wherever I could reach it."

By the end of the war, of the nearly 2,000 accredited war correspondents in WWII, 127 were women.

About The Widow & The War Correspondent: