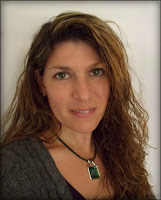 Linda:  Thanks for joining me today. Congratulations on your book A Cord of Three Strands. The premise is fascinating. Where did you find your inspiration for the story?

CHRISTY: Thank you so much, and thank you for hosting me, Linda! My inspiration actually came from a dream. I know, cliché, right? But it’s true. Years ago I was working on the genealogy of my maternal grandmother’s family and came across a name—Seneca Lukens—that made me question the family’s connection to the Seneca tribe. That night Isaac Lukens—a man born to a French trader and a Lenape woman—showed up in a dream. From there I started writing his story, and it ended up intertwining with historical happenings and people.

LM: Research is an important part of the writing process. What sort of research did you do for A Cord of Three Strands? Did you unearth anything that was totally unexpected that you knew you had to include?

CHRISTY: ACTS required sooo much research. I had some general knowledge already since I love historical fiction and I attended Horsham Friends Meeting (the Quaker meeting in the book) for a couple of years when I was a young adult. That said, a lot of research was still necessary, especially since all the places in the story, as well as several people and the Friendly Association (the group of Philadelphia Quakers who attempted to act as a liaison between Pennsylvania and its Indian tribes) aren’t fictional. But I love research, so I didn’t mind it.

As far as unearthing something unexpected, yes—two things, actually. The first was the Friendly Association. I didn’t know about that until I started researching, and when I learned the group formed at exactly the time the book was set, I knew I had to include it. The other thing I learned didn’t end up in the book, but it gave me some real insight into what life was like in the eighteenth century. About a year after ACTS’s prologue takes place, Gwynedd Friends Meeting (the nearest meeting to Horsham) was hit by an epidemic, probably diphtheria, that took the lives of about sixty of the children—almost that entire generation—in two months’ time. Just inconceivable. Several of the children were cousins to my ancestors, and I’d love to find a way to somehow write a tribute to those children and their families. But wow, what an emotionally intense undertaking that would be.

LM:  What is your favorite part of the writing process?

CHRISTY: For ACTS, seeing it all come together in the end. I didn’t plot this novel like I did the one I’m working on right now, so seeing the way everything fell into place just perfectly (in my eyes, anyway) just amazed me. Of course, I know better than to take credit for that. God planted this story in my heart, and even though I tended it, he caused it to grow.

LM: You are a professional editor in addition to being a novelist. How do you balance the two roles? Is it difficult to turn off your internal editor as you’re drafting?

CHRISTY: It’s definitely a balancing act. Editing is a more right-brained activity while writing is more left-brained, and switching from one to the other on the fly doesn’t always go smoothly for me. I’ve found it’s best to set aside days for just writing (not editing my work or anyone else’s). Turning off the internal editor can be difficult too, which is why I’m probably one of the slowest writers I know. I tell my authors to get the story down on paper and worry about the more challenging details later, but I’m not so good at taking my own advice with this. I’m working on that. 😊

LM: What has been the most challenging part of the road to publication for you? What advice do you have for fledgling writers?

CHRISTY: The most challenging part for me has been believing I’m a “good-enough” writer. A lot of authors deal with some degree of impostor syndrome (doubting your talents or accomplishments), and that was the biggest hurdle for me. I love writing fiction so much that I could be happy writing only because I enjoy it, but then I came to the realization that, no matter my doubts, God has called me to write stories that bring glory to him, and that by not sharing them with others, I’m not being obedient. My deepest desire is to be obedient to him, so I had to get out of my own way and let him lead.

My advice: Ask God’s blessing and direction as you write, and study fiction craft. And enjoy the ride!

Favorite season: I love spring. I love fall too, but fall leads to winter, so spring wins.
Favorite vacation spot: Brant Beach, New Jersey
Favorite place to write: On the couch, with my dogs next to me.

CHRISTY: I’m almost finished a novel that checks two of the boxes on my (now defunct) Things I’ll Never Write list: romance and Amish—although it’s not really Amish since it takes place in an Old Order Mennonite community. It’s a pretty big jump from historical fiction, but I still have the Plain community connection. I also plan to do more with the Lukens family. Several of my ancestors were involved with the Underground Railroad, and I’d love to bring their stories to light.

About A Cord of Three Strands: 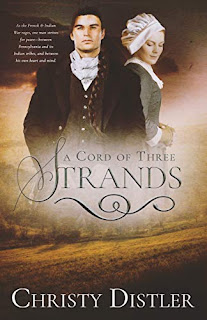 Born to a French trader and a Lenape woman. Reared by Quakers. As the French & Indian War rages, one man strives for peace—between Pennsylvania and its Indian tribes, and between his own heart and mind.

As 1756 dawns, Isaac Lukens leaves the Pennsylvania wilderness after two years with the Lenape people. He’s failed to find the families of his birth parents, a French trader and a Lenape woman. Worse, the tribe he’s lived with, having rejected his peacemaking efforts, now ravages frontier settlements in retaliation. When he arrives in the Quaker community where he was reared, questions taunt him: Who is he—white man or Lenape? And where does he belong?

Elisabeth Alden, Isaac’s dearest childhood friend, is left to tend her young siblings alone upon her father’s death. Despite Isaac’s promise to care for her and the children, she battles resentment toward him for having left, while an unspeakable tragedy and her discordant courtship with a prominent Philadelphian weigh on her as well.

Elisabeth must marry or lose guardianship of her siblings, and her options threaten the life with her and the children that Isaac has come to love. Face with Elisabeth’s hesitancy to marry, the prospect of finding his family at last, and the opportunity to assist in the peace process between Pennsylvania and its Indian tribes, Isaac must determine where—and to whom—the Almighty has called him.