The second largest U.S. state by both area (after Alaska) and population (after California), Texas is also larger than many countries. At 268,820 square miles, the state is almost twice as large as Germany or Japan and over twice the size of the United Kingdom. Its fascinating history includes ownership by Spain and France as well as being a member of both the United States and the Confederate States. For nearly ten years, Texas was also a republic having gained its independence from Mexico after the Texas Revolution.

On December 29, 1845 Texas was admitted at the twenty-eighth state. As a result, Mexico broke off diplomatic relations with the U.S., and a boundary dispute went one for three years. The population was a strong mix of English-speaking settlers and Spanish-speaking former Mexicans. New settlers streamed into the state, many bringing their slaves. It wasn’t long before the beef industry took hold, with cattle being shipped all over the U.S. and Caribbean. The cotton, timber, and oil industries also created a strong economy within the state.

Nestled in the north central part of the state, the small town of Sweetwater sprouted. They received a post office in 1879, and the Texas and Pacific Railway started service two years later. To increase railroad traffic, the town built a town lake in 1898, then three more in subsequent years. The Kansas City, Mexico and Orient Railway began construction in 1903. Sweetwater became a railroad town with businesses and homes clustering along the rail lines.

As with many towns across the U.S. during World War II, Sweetwater’s population increased dramatically, more than doubling in large part to Avenger Field (named in a contest won by a Mrs. Grace Faver). Covering nearly 900 acres, the field began as the Sweetwater Municipal Airport in the 1920s. A small flight school operated using WWI surplus planes. In August 1941, the Army Air Force took over and created a training base. The flight school was taken over by the Plosser-Prince Air Academy who was contracted by the Royal Canadian Air Force to train British and American volunteer pilots. 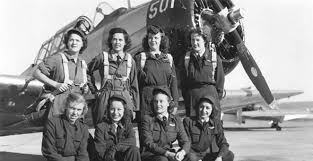 One class of British Royal Air Force pilots was trained before the field was converted for training American women pilots: Jacqueline Cochran’s Women Air Service Pilots (WASP). The private flying school was closed in August 1942, and the base became a formal Army Air Force military installation to be used by the Air Transport Command as a transition school for experienced single-engine pilots. The graduates would be certified on twin-engine planes before being sent overseas. Ultimately, the men were moved to other locations and the base solely used for the WASP program.

The program disbanded in December 1944, and at the end of the war the military turned over the airport to local government for civil use. Pilots can still land at Avenger field at the Sweetwater Airport. Located on fifty acres of leased land, the National WASP WWII Museum opened in 2005, with a grand opening held on May 28, the same day the first class of WASP graduated in 1943.

Releasing on September 15, 2020 on Kindle, Kindle Unlimited, and Paperback.