Following Amy’s adventures in A Door Cracked Open, she heads into a world which will test her faith and perseverance to the limit. Instead of settling into a simple, safe and unchanging life like she imagined, Amy is strongly drawn to a vocation with even higher requirements, prompting her to plan some seemingly impossible missions in order to reach her goal.

Into a Silent World takes the reader on the journey of discovery of a young woman who aspires to become a nun. The story was educational for me because as a Protestant, I know very little about the inner workings of the Catholic faith, especially that of priests and nuns. I’ve also never been to France so enjoyed reading about the area. This was the second book in the series, and I think it would have been better for me to have read the first book. I had trouble relating to Amy because she is timid, uncertain, and sometimes fearful, but I enjoyed watching how others interacted with her. Her sweetness had a way of drawing people to her. It saddened me that her family was not more supportive, but it made sense because they didn’t share her faith. I admired that despite her timidity, she often told others about her faith and desire to become a nun, even complete strangers. I would have preferred more dialogue and showing rather than telling.

I received a free copy of the book from CelebrateLit Publicity, and a favorable review was not required. All opinions are my own. 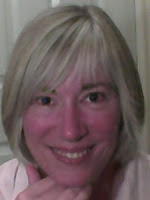 I am a mother of two wonderful grown up children and currently living in the UK, after living in Sweden for three years where I wrote my first book, “A Door Cracked Open.” I was blessed to be able to spend six months in USA before returning to the UK, my home country, to work with my editor in California on the edits of this book and visit friends. I am an avid reader and linguist, having also spent some years living in France and have been fortunate enough to have taught Swedish and French over twenty-five years and translate for businesses and manuscripts in both languages. Being unemployed the past few years, has led to me becoming homeless. However, I never give up hope. As I try to portray in my books, God has always had His hand on me. Once again, He has stepped in right at the last minute. I now have a new job in Sweden and will be moving back there. Because I feel passionately about helping the homeless, a large percentage of my royalties will go directly to them.

“Into a Silent World” follows on from Amy’s story in “A Door Cracked Open.” With a new beginning ahead of her, a long standing dream about to be realized, she was unprepared for the events which were about to unfold over the next two years. Why would God send her to this place of “absolute conviction” and allow her to remain there for that long, if He never meant for her to be there? Amy struggles to understand and seeks His will, but determined that it was His plan, she persevered in order for her dream to be fulfilled.

Here are the remaining stops on Carmina's Tour:

To celebrate her tour, Carmina is giving away
Grand Prize:
Paperback copies of A Door Cracked Open & Into a Silent World
1st – 3rd place:
Ebook copy of A Door Cracked Open!!
Click below to enter. Be sure to comment on this post before you enter to claim 9 extra entries! https://promosimple.com/ps/c3c4
Posted by Linda Matchett at 1:30 AM