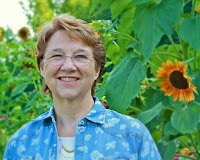 Today's guest is Ann H. Gabhart, author of twenty books, with more on the way! Settle in and get to know this interesting lady.

Linda:  Thanks for joining me today. Congratulations on your latest publication, These Healing Hills? What was your inspiration for the story?

Ann: Most of my historical novels have a Kentucky setting with some Kentucky history. So when I was rummaging around for a new idea, I came across information about Mary Breckinridge and how she established the Frontier Nursing Service in Hyden, Kentucky in 1926. So I imagined characters who might fit into that Appalachian Mountain setting and Frontier Nursing history.

LM: Research is a huge part of writing, whether historical or contemporary. Do you have a research tidbit you stumbled on that caused you to think “aha?”

Ann: Everything I found out about the Frontier Nursing Service was an “aha” moment. All the history and first person accounts were fascinating. But I did perhaps think aha when I stumbled upon the recruitment poster the Frontier Nursing Service used to entice nurses to come to the mountains to be midwives. That poster promised the women their own dog, their own horse and plenty of adventure as they saved children’s live. I knew my character wouldn’t be able to resist that.

Ann: I sometimes like having written. No, I really like to write but the process isn’t always a walk in the park. Getting from the beginning through the middle and to the end can be a tough writing journey that takes months, even years. Perhaps my favorite time is when I have finally written “the end” on the last page and then get to go back and read it with editing in mind. I like to edit when the edits are my idea. I find it a bit harder to get excited about those cuts and changes when the changes are suggested by others. J

Ann: I’ve never listened to music for inspiration. I simply sit down at my desk, put my fingers on my keyboard and order myself to get to work. If I am in the midst of writing a book, then I often reread the last several pages I wrote last writing session to get my head back into the story. As you may have gathered from my previous answer, reading what I’ve written is much easier than writing those new words. But you have to write the new words to get the story told.

LM: You live in a beautiful part of the country, a place many people would visit on holiday. If money were no object, what is your idea of the ultimate vacation?

Ann: An interesting question. If money were no object, I think I would like to tour all over the USA in one of those nice campers, visiting every state, spending time in the beautiful National Parks. Then I might hole up for a month or two in a mountain cabin before spending another month on the beach – a southern beach if it’s winter and a northern beach if it’s summer. But I would have to head back home now and again. I’d miss my own place.

Ann: Next up is a book titled River to Redemption that will release next summer. It’s set in a little Kentucky town in 1833, then the story hops to 1845. While the story is a work of fiction, I did base it on a true incident that occurred during the 1833 cholera epidemic in Springfield, Kentucky. At that time, people thought bad air caused cholera. So all who had the resources to do so would desert their towns at the first mention of cholera in the area.  That often left few to tend to those left who might be sick or who died from the disease. In Springfield, a hotel owner gave one of his slaves the hotel keys and told him to keep things going. Then the owner fled the town. That slave, Lewis Sansbury, was unaffected by the disease. He stayed in Springfield, caring for the sick and burying the fifty-five people who died. In 1845 when his owner died and it appeared Lewis was going to be sold, the townspeople collected money to buy his freedom and set Lewis up in a blacksmith shop. That’s the true bit of history. River to Redemption is about how that might have happened if you made up a story which I did.

LM: That sounds like a wonderful story. Where can folks find you on the web?

Ann: The best place to look for me is on my website, www.annhgabhart.com. You can see my social media links there and my blogs. I like it when friends and readers join the conversation on my Facebook author page, www.facebook.com/anngabhart. I tweet now and again on Twitter with a user name, AnnHGabhart. I’m out there on Goodreads. I post pictures on Pinterest under my name and have an Amazon author page. Plus, you can sign up for my occasional newsletter on my website. That way you can be the first to know about new books, giveaways or what’s going on down here on the farm.

Thanks so much, Linda, for letting me come over for a visit.

LM: It's been a pleasure to have her. These Healing Hills is available on Amazon, other book buying sites, and in your local bookstore.
Posted by Linda Matchett at 1:30 AM